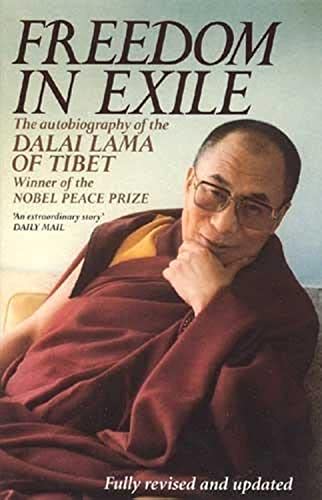 Freedom In Exile
by His Holiness The Dalai Lama

Used Price
$9.99
Free Shipping in the US
*Fascinating insight into the mind of one of the greatest contemporary spiritual leaders. *In depth knowledge of secret political deals involving CIA, Chairman Mao and President Nehru.
Reviews:
Trustpilot
Very Good Good

Freedom In Exile: The Autobiography of the Dalai Lama of Tibet by His Holiness The Dalai Lama

In 1938 a two year old boy was recognised through a traditional process of discovery as being the reincarnation of all previous Dalai Lamas, the spiritual rulers of Tibet. Taken away from his parents, he was brought up in Lhasa according to a monastic regimen of rigorous austerity and in almost total isolation. Aged seven he was enthroned in the 1000-room Potala palace as the supreme spiritual leader of a nation the size of Western Europe, with population of six million. And at fifteen, he became head of state. With Tibet under threat from the newly Communist Chinese, there followed a traumatic decade during which he became the confidant of both Chairman Mao and Jawaharal Nehru as he tried to maintain autonomy for his people. Then in 1959, he was finally forced into exile - followed by over 100,000 destitute refugees. Here, in his own words, he describes what it was like to grow up revered as a deity among his people, reveals his innermost feelings about his role, and discusses the mysteries of Tibetan Buddhism.

A touching book, that arouses great sympathy for its extraordiary author * SPECTATOR *
From the supernatural marvels of Shangri-La to the life-and-death manoeverings of Realpolitik: an earnest, inspiring, and wholly captivating tale of spiritual adventure * KIRKUS REVIEWS *
The Dalai Lama's autobiography should leave no one in doubt of his humility and genuine compassion. Written without the slightest hint of pretence, the exiled leader of Tibet recounts his life, from the time he was whisked away from his home in 1939 at the age of four, to his escape from Tibet in 1959, to the winning of the Nobel Peace Prize in 1989. The backdrop of the story is the 1950 Chinese invasion of Tibet. We learn in calm detail of imprisonment, torture, rape, famine, ecological disaster and genocide that in under four decades of Chinese rule have left a million-and-a-quarter Tibetans dead and the Tibetan natural and religious landscapes decimated. Yet the Dalai Lama's story is strangely one of hope. This man who prays for four hours a day harbours no ill will toward the Chinese and sees the potential for good everywhere he casts his gaze. Someday, he hopes, all of Tibet will be a zone of peace and the world's largest nature preserve. Such optimism is not naive, but a result of his daily studies in Buddhist philosophy and his doctrine of Universal Responsibility. Inspiring in every way, Freedom in Exile is both a historical document and a fable of deepest trust in humanity. * Brian Bruya, AMAZON.CO.UK REVIEW *

About His Holiness The Dalai Lama

The Dalai Lama is the head of the Buddhist 'religion'. He was chosen to be the reincarnation of all the previous Dalai Lamas as a two year old boy.

GOR001279162
Freedom In Exile: The Autobiography of the Dalai Lama of Tibet by His Holiness The Dalai Lama
His Holiness The Dalai Lama
Used - Very Good
Paperback
Little, Brown Book Group
1998-04-02
352
0349111111
9780349111117
N/A
Book picture is for illustrative purposes only, actual binding, cover or edition may vary.
This is a used book - there is no escaping the fact it has been read by someone else and it will show signs of wear and previous use. Overall we expect it to be in very good condition, but if you are not entirely satisfied please get in touch with us.