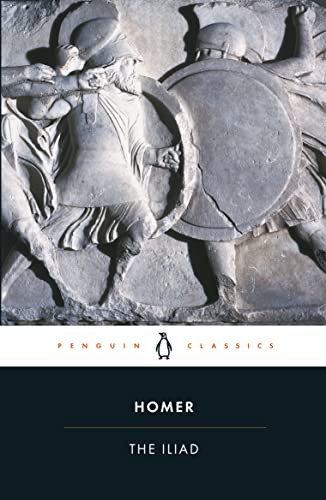 In Stock
$9.69
Tells the story of darkest episode in "Trojan War". At its centre is Achilles, greatest warrior-champion of Greeks, and his refusal to fight after being humiliated by his leader Agamemnon. But when Trojan Hector kills Achilles' close friend Patroclus, he storms back into battle to take revenge - even though he knows this may ensure his own death.
Very Good
Only 4 left

Homer's Iliad is the greatest and most influential epic poem ever written, telling of the tragic and bloody climax to the ten-year siege of Troy. This Penguin Classics edition was originally translated by E.V. Rieu, revised and updated with an introduction and notes by Peter Jones and D.C.H. Rieu.

One of the foremost achievements in Western literature, Homer's Iliad tells the story of the darkest episode in the Trojan War. At its centre is Achilles, the greatest warrior-champion of the Greeks, and his refusal to fight after being humiliated by his leader Agamemnon. But when the Trojan Hector kills Achilles' close friend Patroclus, he storms back into battle to take revenge - even though he knows this will ensure his own untimely death. Interwoven with this tragic sequence of events are powerfully moving descriptions of the ebb and flow of battle, of the domestic world inside Troy's besieged city of Ilium, and of the conflicts between the Gods on Olympus as they argue over the fate of mortals.

E.V. Rieu's acclaimed translation of The Iliad was one of the first titles published in Penguin Classics, and now has classic status itself. For this edition, Rieu's text has been revised, and now a new introduction and notes by Peter Jones complement the original introduction.

"Fitzgerald has solved virtually every problem that has plagued translators of Homer. The narrative runs, the dialogue speaks, the military action is clear, and the repetitive epithets become useful text rather than exotic relics." -Atlantic Monthly

"Fitzgerald's swift rhythms, bright images, and superb English make Homer live as never before...This is for every reader in our time and possibly for all time."-Library Journal

"[Fitzgerald's Odyssey and Iliad] open up once more the unique greatness of Homer's art at the level above the formula; yet at the same time they do not neglect the brilliant texture of Homeric verse at the level of the line and the phrase." -The Yale Review

"What an age can read in Homer, what its translators can manage to say in his presence, is one gauge of its morale, one index to its system of exultations and reticences. The supple, the iridescent, the ironic, these modes are among our strengths, and among Mr. Fitzgerald's." -National Review

With an Introduction by Gregory Nagy

Homer is thought to have lived c.750-700 BC in Ionia and is believed to be the author of the earliest works of Western Literature: The Odyssey and The Iliad. E V Rieu was a celebrated translator from Latin and Greek, and editor of Penguin Classics from 1944-64. His son, D C H Rieu, has revised his work. Peter Jones is former lecturer in Classics at Newcastle. He co-founded the 'Friends of Classics' society and is the editor of their journal and a columnist for The Spectator.

GOR001227808
The Iliad by Homer
Homer
Used - Very Good
Paperback
Penguin Books Ltd
2003-01-30
560
0140447946
9780140447941
N/A
Book picture is for illustrative purposes only, actual binding, cover or edition may vary.
This is a used book - there is no escaping the fact it has been read by someone else and it will show signs of wear and previous use. Overall we expect it to be in very good condition, but if you are not entirely satisfied please get in touch with us.