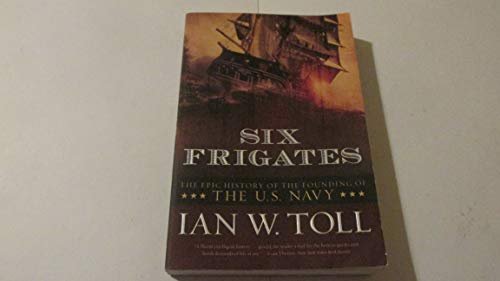 Used Price
$12.39
Free Shipping in the US
"A fluent, intelligent history...give[s] the reader a feel for the human quirks and harsh demands of life at sea."-New York Times Book Review
Reviews:
Trustpilot
Very Good

Six Frigates: The Epic History of the Founding of the U.S. Navy by Ian W. Toll

Before the ink was dry on the U.S. Constitution, the establishment of a permanent military became the most divisive issue facing the new government. The founders-particularly Jefferson, Madison, and Adams-debated fiercely. Would a standing army be the thin end of dictatorship? Would a navy protect from pirates or drain the treasury and provoke hostility? Britain alone had hundreds of powerful warships.

From the decision to build six heavy frigates, through the cliff-hanger campaign against Tripoli, to the war that shook the world in 1812, Ian W. Toll tells this grand tale with the political insight of Founding Brothers and the narrative flair of Patrick O'Brian.

"Sweeping in scope, full of vivid descriptions... solidly grounded in the diplomatic landscape... a masterly work." -- Chris Patsilelis - Houston Chronicle
"[A] wonderfully atmospheric account, brilliantly researched, full of stirring action and rich with the scent of the sea." -- Simon Winchester, author of The Professor and the Madman
"Gripping... a masterful narrative... Toll captures the ambivalence of the government, and its reluctance to pay for even a tiny navy, very well." -- Joe Mysak - Bloomberg News
"Toll has a light touch, much like noted historian David McCullough; well-researched facts are carefully balanced by smooth narrative flow.... The result is a thoroughly readable book that adds depth and significance to an important era of American history." -- Bruce Linder - San Diego Tribune
"Vibrant and comprehensive, Toll makes an impressive debut." -- Gilbert Taylor - Booklist

Ian W. Toll is the author of Twilight of the Gods, the New York Times bestseller The Conquering Tide, Pacific Crucible, and Six Frigates, winner of the Samuel Eliot Morison Award and the William E. Colby Award. He lives in New York.

CIN000166258
Six Frigates: The Epic History of the Founding of the U.S. Navy by Ian W. Toll
Ian W. Toll
Used - Very Good
Paperback
WW Norton & Co
2008-05-06
592
039333032X
9780393330328
N/A
Book picture is for illustrative purposes only, actual binding, cover or edition may vary.
This is a used book - there is no escaping the fact it has been read by someone else and it will show signs of wear and previous use. Overall we expect it to be in very good condition, but if you are not entirely satisfied please get in touch with us.