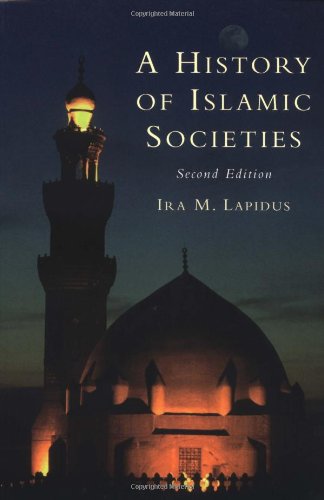 A History of Islamic Societies
by Ira M. Lapidus (University of California, Berkeley)

Used Price
$35.99
Free Shipping in the US
Ira Lapidus' classic history of the origins and evolution of Muslim societies was revised and updated for this second edition, first published in 2002. The book traces the evolution of Islam from Muhammad to the present day. It is essential reading for students and for anyone seeking to understand the Muslim peoples.
Reviews:
Trustpilot
Like New Very Good

A History of Islamic Societies Summary

A History of Islamic Societies by Ira M. Lapidus (University of California, Berkeley)

In this second edition, first published ijn 2002, Ira Lapidus explores the origins and evolution of Muslim societies. The book, revised and updated, is divided into three parts. The first covers the formative era of Islamic civilization. The second traces the diffusion of worldwide Islamic societies, while the third explores their reaction to European imperialism, and emergence as independent states. The concluding chapters consider Islam's recent history, the formation of Islamic revival movements and global Islamic identities. The book is essential reading for students and for those seeking to understand the Muslim peoples.

A History of Islamic Societies Reviews

Ira M. Lapidus was Professor of Islamic history at the University of California at Berkeley.

Part I. The Origins of Islamic Civilization: The Middle East from c.600-1200; Introduction; The Preaching of Islam: 1. Arabia; 2. The Life of the Prophet; The Arab-Muslim Imperium, 632-945: 3. The Arab conquests and the socio-economic bases of empire; 4. The Caliphate; 5. Cosmopolitan Islam: the Islam of the imperial elite; 6. Urban Islam: the Islam of the religious elites; 7. Islamic culture and the separation of state and religion; 8. The fall of the 'Abbasid empire; From Islamic Culture to Islamic Society: Iran and Iraq, 945-c.1200: 9. The post- 'Abbasid Middle Eastern state system; 10. Muslim communities and Middle Eastern societies; 11. The collective ideal; 12. The personal ethic; Conclusion; Part II. The Worldwide Diffusion of Islamic Societies from the Tenth to the Nineteenth Century: Introduction; The Middle Eastern Islamic Societies: 13. Iran: the Mongol, Timurid, and Safavid empires; 14. The Turkish migrations and the Ottoman empire; 15. The Arab Middle East; 16. Islamic North Africa and Spain to the nineteenth century; Islam in Central and Southern Asia: 17. Inner Asia from the Mongol conquests to the nineteenth century; 18. The Indian subcontinent: the Delhi Sultanates and the Mughal empire; 19. The formation of Islamic societies in Southeast Asia; Islam in Africa: 20. Islam in Sudanic, Savannah, and Forest West Africa; 21. Islam in East Africa and the rise of European colonial empires; Conclusion; Part III. The Modern Transformation: Muslim Peoples in the Nineteenth and Twentieth Centuries: Introduction; Nationalism and Islam in the Middle East: 22. Iran: state and religion in the modern era; 23. The dissolution of the Ottoman empire and the modernization of Turkey; 24. Egypt: secularism and Islamic modernity; 25. The Arab Middle East: Arabism, military states, and Islam; 26. North Africa in the nineteenth and twentieth centuries; Secularism and Islam in Central and Southern Asia: 27. The Indian subcontinent: India, Pakistan and Bangladesh; 28. Islam in Indonesia, Malaysia and the Philippines; 29. Inner Asia under Russian and Chinese rule; Islam in Twentieth-Century Africa: 30. Islam in West Africa; 31. Islam in East Africa; 32. Muslims in Europe and America; Conclusion: secularized Islam and Islamic revival.

GOR006883271
A History of Islamic Societies by Ira M. Lapidus (University of California, Berkeley)
Ira M. Lapidus (University of California, Berkeley)
Used - Like New
Paperback
Cambridge University Press
2002-08-22
1002
0521779332
9780521779333
N/A
Book picture is for illustrative purposes only, actual binding, cover or edition may vary.
The book has been read, but looks new. The book cover has no visible wear, and the dust jacket is included if applicable. No missing or damaged pages, no tears, possible very minimal creasing, no underlining or highlighting of text, and no writing in the margins.