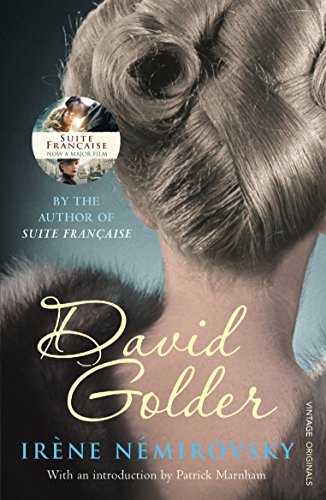 In Stock
$17.49
When the novel opens, he is at work in his magnificent Parisian apartment while his wife and beloved daughter, Joyce`, spend his money at their villa in Biarritz.
Very Good Good
10 in stock

From the author of the bestselling Suite Francaise. Translated by Sandra Smith, with an introduction by Patrick Marnham. In 1929, 26-year-old Irene Nemirovsky shot to fame in France with the publication of her second novel David Golder. At the time, only the most prescient would have predicted the events that led to her extraordinary final novel Suite Francaise and her death at Auschwitz. Yet the clues are there in this astonishingly mature story of an elderly Jewish businessman who has sold his soul. Golder is a superb creation. Born into poverty on the Black Sea, he has clawed his way to fabulous wealth by speculating on gold and oil. When the novel opens, he is at work in his magnificent Parisian apartment while his wife and beloved daughter, Joyce`, spend his money at their villa in Biarritz. But Golder's security is fragile. For years he has defended his business interests from cut-throat competitors. Now his health is beginning to show the strain. As his body betrays him, so too do his wife and child, leaving him to decide which to pursue: revenge or altruism? Available for the first time since 1930, David Golder is a page-turningly chilling and brilliant portrait of the frenzied capitalism of the 1920s and a universal parable about the mirage of wealth.

"Her deceptively simply and understated style is best suited to shorter fiction: her touch is light, but with an underlying darkness that bears witness to exile, marginality and existential frustration" -- Aamer Hussein * Independent *
"This is a writer of rare power, make no mistake" * Evening Standard *
"A sordid tragedy that makes us for the thousandth time question the worth of human existence. The impression remains with the reader that it is the work of a woman who has the strength of one of the masters like Balzac or Dostoyevsky" * New York Times, 1930 *
"A powerful description of a man's relentless decline" -- Ian Critchley * Sunday Times *
"Striking first work, sensitively translated by Sandra Smith" * Sunday Telegraph *

Irene Nemirovsky was born in Kiev in 1903, the daughter of a successful Jewish banker. In 1918 her family fled the Russian Revolution for France where she became a bestselling novelist, author of David Golder, Le Bal and other works published in her lifetime or soon after, as well as the posthumous Suite Francaise and Fire in the Blood. In July 1942 she was arrested by the French police and interned in Pithiviers concentration camp, and from there immediately deported to Auschwitz where she died in August 1942.

GOR001241561
David Golder by Irene Nemirovsky
Irene Nemirovsky
Used - Very Good
Paperback
Vintage Publishing
2007-02-01
176
0099493969
9780099493969
N/A
Book picture is for illustrative purposes only, actual binding, cover or edition may vary.
This is a used book - there is no escaping the fact it has been read by someone else and it will show signs of wear and previous use. Overall we expect it to be in very good condition, but if you are not entirely satisfied please get in touch with us.