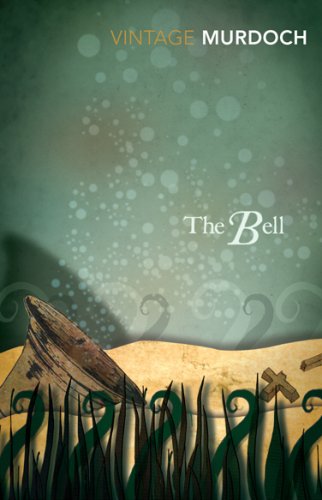 The Bell
by Iris Murdoch

In Stock
$11.99
Discover Murdoch's wonderful writing in this compelling story of a young woman and an unusual religious lay community. Michael Mead, leader of the community, is confronted by Nick Fawley, with whom he had disastrous homosexual relations, while the wise old Abbess watches and prays and exercises discreet authority.
Very Good Good
8 in stock

Discover Murdoch's wonderful writing in this compelling story of a young woman and an unusual religious lay community. A lay community of thoroughly mixed-up people is encamped outside Imber Abbey, home to an enclosed order of nuns. A new bell, legendary symbol of religion and magic, is rediscovered. Dora Greenfield, erring wife, returns to her husband. Michael Mead, leader of the community, is confronted by Nick Fawley, with whom he had disastrous homosexual relations, while the wise old Abbess watches and prays and exercises discreet authority. And everyone, or almost everyone, hopes to be saved whatever that may mean... Iris Murdoch's funny and sad novel is about religion, the fight between good and evil and the terrible accidents of human frailty.

"Her novels evoked beautifully the atmosphere of the country gardens (The Bell, 1958) or the mysterious London streets (The Time of the Angels, 1968) in which they were set, with their characters engaged in intriguing love relationships, from the totally innocent to the wholly weird." * The Times *
"Iris Murdoch really knows how to write, can tell a story, delineate a character, catch an atmosphere with deadly accuracy" -- John Betjeman
"Of all the novelists that have made their bow since the war she seems to me to be the most remarkable-behind her books one feels a power of intellect quite exceptional in a novelist" * Sunday Times *
"A distinguished novelist of a rare kind" -- Kingsley Amis
"A tragi-comic masterpiece... A magnificent novel" -- Susan Hill * The Lady *

Iris Murdoch was born in Dublin in 1919. She read Classics at Somerville College, Oxford, and after working in the Treasury and abroad, was awarded a research studentship in Philosophy at Newnham College, Cambridge. In 1948 she returned to Oxford as fellow and tutor at St Anne's College and later taught at the Royal College of Art. Until her death in 1999, she lived in Oxford with her husband, the academic and critic, John Bayley. She was made a Dame of the British Empire in 1987 and in the 1997 PEN Awards received the Gold Pen for Distinguished Service to Literature. Iris Murdoch made her writing debut in 1954 with Under the Net. Her twenty-six novels include the Booker prize-winning The Sea, The Sea (1978), the James Tait Black Memorial prize-winning The Black Prince (1973) and the Whitbread prize-winning The Sacred and Profane Love Machine (1974). Her philosophy includes Sartre: Romantic Rationalist (1953) and Metaphysics as a Guide to Morals (1992); other philosophical writings, including 'The Sovereignty of Good' (1970), are collected in Existentialists and Mystics (1997).

GOR001228000
The Bell: Vintage Classics Murdoch Series by Iris Murdoch
Iris Murdoch
Vintage Classics Murdoch Series
Used - Very Good
Paperback
Vintage Publishing
2004-02-05
352
0099470489
9780099470489
N/A
Book picture is for illustrative purposes only, actual binding, cover or edition may vary.
This is a used book - there is no escaping the fact it has been read by someone else and it will show signs of wear and previous use. Overall we expect it to be in very good condition, but if you are not entirely satisfied please get in touch with us.