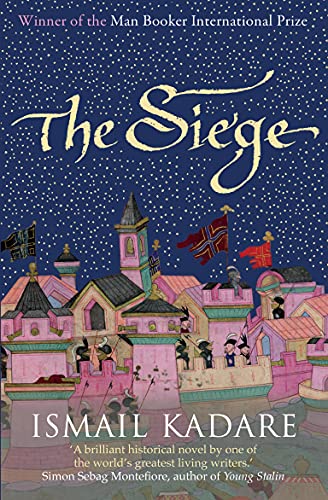 The Siege
by Ismail Kadare

Used Price
$9.39
Free Shipping in the US
Compelling historical fiction from one of the world's greatest living writers
Reviews:
Trustpilot
Very Good

The Siege by Ismail Kadare

In the early fifteenth century, as winter falls away, the people of Albania know that their fate is sealed. They have refused to negotiate with the Ottoman Empire, and war is now inevitable. Soon enough dust kicked up by Turkish horses is spotted from a citadel. Brightly coloured banners, hastily constructed minarets and tens of thousands of men fill the plain below. From this moment on, the world is waiting to hear that the fortress has fallen. The Siege tells the enthralling story of the weeks and months that follow - of the exhilaration and despair of the battlefield, the constantly shifting strategies of war, and those whose lives are held in balance, from the Pasha himself to the technicians, artillerymen, astrologer, blind poet and harem of women that accompany him. Brilliantly vivid, as insightful as it is compelling, The Siege is an unforgettable account of the clash of two great civilisations. As a portrait of war, it resonates across the centuries and confirms Ismail Kadare as one of our most significant writers.

The Siege is a compelling tale of the savagery and uncertainty of war, and a brilliant historical novel by one of the world's greatest living writers * * Simon Sebag Montefiore * *
A rallying cry to people besieged by the forces of tyranny. -- Alice Fordham * * The Times * *
One of the most important voices in literature today. -- Alan Chadwick * * Metro * *
A tale steeped in blood, a snapshot of a centuries-long conflict, but at the same time Kadare's realism and lively sense of irony give it a modern twist. -- Adam Lively * * Sunday Times * *
The urgent gestures towards something that's not quite said somehow make the story linger in the mind long after the regime in which The Siege was written went the way of the empire it dreams back to life. -- Christopher Taylor * * Guardian * *
His fiction offers invaluable insights into life under tyranny - his historical allegories point both to the grand themes and small details that make up life in a restrictive environment. He is a great writer, by any nation's standards. -- Ben Naparstek * * Financial Times * *
Powerfully atmospheric. -- Jane Jakeman * * TLS * *
One of the great writers of our time. * * Scotsman * *
A master storyteller * * John Carey * *
Ismail Kadare is one of Europe's most consistently interesting and powerful contemporary novelists, a writer whose stark, memorable prose imprints itself on the reader's consciousness. * * Los Angeles Times * *
There are very few writers alive today with the depth, power and resonance of this remarkable novelist, regularly cited as a Nobel Prize contender . . . On no account must this be missed. * * Herald * *
"Homeric" wouldn't be too exalted a term for this work. Writing with deceptive simplicity, Kadare builds up a world of flesh and blood characters almost without the reader noticing. ... Kadare was already a master of his craft nearly 40 years ago. -- Alistair Mabbot * * Herald * *
Gravid, quasi-classical prose...invigorated by ironic observations. -- Alfred Hickling * * Guardian * *
A story that is both stirring at a human level and steeped in historical symbolism . . . A vast and varied cast is expertly marshalled by a writer who is increasingly enjoying a worldwide reputation. -- Sally Cousins * * Sunday Telegraph * *
The Siege is more relevant and powerful than ever . . . Kadare's early novel is stunning. The full panoply of the Ottoman's multi-ethnic empire is vividly rendered. -- Heather McRobie * * Daily Telgraph * *
Mystery and suspense fuel a classic parable of power and its pitfalls. * * Independent * *

ISMAIL KADARE was born in 1936 in Gjirokaster, in the south of Albania. He studied in Tirana and Moscow, returning to Albania in 1960 after the country broke ties with the Soviet Union. Translations of his novels have since been published in more than forty countries, and in 2005 he became the first winner of the Man Booker International Prize. DAVID BELLOS, Director of the Program in Translation at Princeton University, is also the translator of Georges Perec's Life A User's Manual and a winner of the Goncourt Prize for biography. He has translated seven of Ismail Kadare's novels, and in 2005 was awarded the Man Booker International Prize for his translations of Kadare's work.

GOR001292792
The Siege by Ismail Kadare
Ismail Kadare
Used - Very Good
Paperback
Canongate Books Ltd
2009-03-05
336
1847671225
9781847671226
N/A
Book picture is for illustrative purposes only, actual binding, cover or edition may vary.
This is a used book - there is no escaping the fact it has been read by someone else and it will show signs of wear and previous use. Overall we expect it to be in very good condition, but if you are not entirely satisfied please get in touch with us.