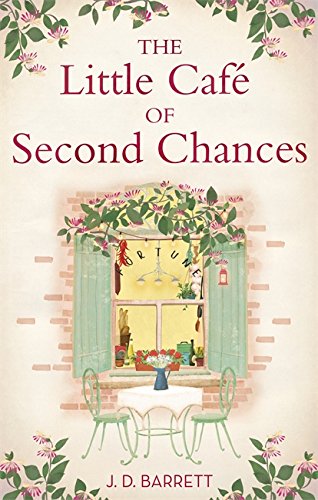 The Little Cafe of Second Chances: a heartwarming tale of secret recipes and a second chance at love
by J. D. Barrett

Used Price
$7,39
Free Shipping in the US
A deliciously entertaining debut from an exciting new voice in women's fiction, this is a smart, charming novel about how it's never too late for a second chance
Reviews:
Trustpilot
Very Good

The Little Cafe of Second Chances: a heartwarming tale of secret recipes and a second chance at love Summary

The Little Cafe of Second Chances: a heartwarming tale of secret recipes and a second chance at love by J. D. Barrett

Lucy Muir is leaving her husband. It's complicated.

As joint owners and chefs at one of the best restaurants in town making a clean break is tough. But, let's face it, a woman can only take so much cheating, recipe stealing and lack of good grace.

Despondently driving around the back streets of Woolloomooloo one night, Lucy happens upon an old, empty terrace that was once the city's hottest restaurant: Fortune. One minute she's peering through grimy windows into an abandoned space, the next she's planning a pop-up bistro.

When Lucy fires up Fortune's old kitchen she discovers a little red recipe book that belonged to the former chef, the infamous Frankie Summers. As she cries over the ingredients for Frankie's French Onion Soup, she imagines what Fortune was like in its heyday. It's strange, Lucy can sense Frankie beside her, almost see him there . . .

This fiery chef, who lived with a passion for food and women in almost equal measure, just might help Lucy cook herself up a better life. But is she brave enough to believe?

Charming, heartwarming and just a little bit magical, The Secret Recipe for Second Chances will leave you smiling and hungry for more

Customer Reviews - The Little Cafe of Second Chances: a heartwarming tale of secret recipes and a second chance at love

J.D. Barrett is an Australian television writer and producer with a passion for good food and creating great meals. She has worked on the writing teams for Love My Way, East of Everything, Bed of Roses and Wonderland and worked as a writer/producer on The Story of Australia. She lives between Sydney, Byron Bay and Los Angeles. THE SECRET RECIPE FOR SECOND CHANCES
is her debut novel and she is currently working on her next book.

GOR008083659
The Little Cafe of Second Chances: a heartwarming tale of secret recipes and a second chance at love by J. D. Barrett
J. D. Barrett
Used - Very Good
Paperback
Little, Brown Book Group
2017-02-02
336
034941436X
9780349414362
N/A
Book picture is for illustrative purposes only, actual binding, cover or edition may vary.
This is a used book - there is no escaping the fact it has been read by someone else and it will show signs of wear and previous use. Overall we expect it to be in very good condition, but if you are not entirely satisfied please get in touch with us.