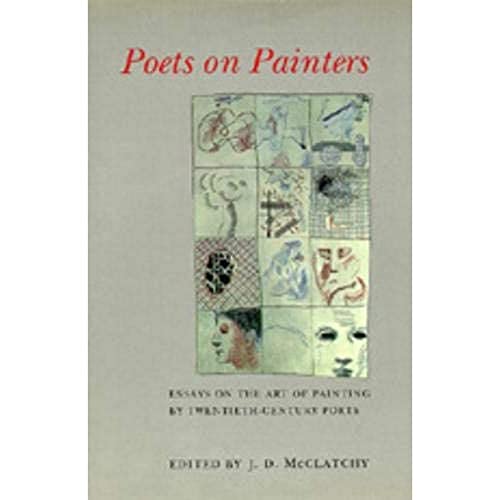 Poets on Painters: Essays on the Art of Painting by Twentieth-Century Poets by J. D. McClatchy

What are poets looking at, looking for, when they walk into a room of pictures? Poets on Painters attempts to answer this question by bringing together, for the first time, essays by modern American and British poets about painting. The poets bring to their task a fresh eye and a freshened language, vivid with nuance and color and force.

"When poets turn their attention to arrangements of oil on canvas, we can expect the unexpected. . . . The ultimate value of this anthology and the reason it deserves a wider readership lie in the way it reminds us that a responsibility--and a joy--of the art writer, in [Richard] Howard's words, is to 'ransack the world in search of eloquence. . . one wants the terms by which to declare one's adoration.'"--Jan Heller Levi, "Artforum

J. D. McClatchy is Poetry Editor of The Yale Review, and his poems, essays, and reviews appear regularly in The New Republic, The New Yorker and The New York Times Book Review.

A Matisse and
Painting in the American Grain
William Carlos Williams

From Introduction to These Paintings
D. H. Lawrence

The Relations between Poetry and Painting
Wallace Stevens

Calm Even in the Catastrophe
W.H.Auden

On Poetry and Painting,
with a Thought on Music
Howard Nemerov

An Art of Wondering
Robert Duncan

Respect for Things as They Are
John Ashbery

The Poet as Painter
Charles Tomlinson

The Hanged Man and the Dragonfly
Ted Hughes

Fragments of a "Rodin"
Richard Howard

CIN000439098
Poets on Painters: Essays on the Art of Painting by Twentieth-Century Poets by J. D. McClatchy
J. D. McClatchy
Used - Very Good
Paperback
University of California Press
1992-07-01
228
0520069714
9780520069718
N/A
Book picture is for illustrative purposes only, actual binding, cover or edition may vary.
This is a used book - there is no escaping the fact it has been read by someone else and it will show signs of wear and previous use. Overall we expect it to be in very good condition, but if you are not entirely satisfied please get in touch with us.