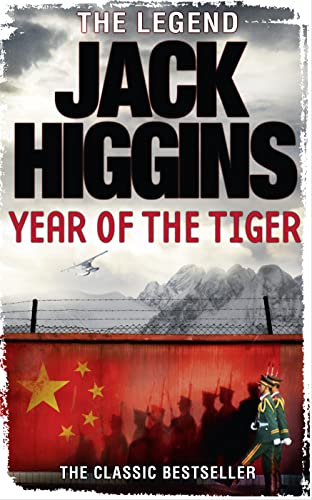 Year of the Tiger
by Jack Higgins

In 1959, British agents masterminded the escape of the Dalai Lama from Tibet. Three years later, Paul Chavasse is doing it all over again...

Year of the Tiger Summary

Year of the Tiger by Jack Higgins

In 1959, British agents masterminded the escape of the Dalai Lama from Tibet. Three years later, Paul Chavasse is doing it all over again...

A vitally important scientist, holding intelligence that could shift the balance of world power, is being held in China.

British secret agent Paul Chavasse, responsible for extracting the Dalai Lama from under Chinese noses, is the perfect man to slip through the border, locate the scientist and bring him back to the West.

But Chavasse's nerve, stamina and loyalties will all be tested as he finds the Chinese are reluctant to let their asset go without a fight...

Customer Reviews - Year of the Tiger

Year of the Tiger Reviews

Jack Higgins was a soldier and then a teacher before becoming a full-time writer. `The Eagle Has Landed' turned him into an international bestselling author and his novels have since sold over 250 million copies and been translated into fifty-five languages. Many of them have also been made into successful films

GOR005197143
Year of the Tiger by Jack Higgins
Jack Higgins
Used - Very Good
Paperback
HarperCollins Publishers
2013-01-31
272
0007349343
9780007349340
N/A
Book picture is for illustrative purposes only, actual binding, cover or edition may vary.
This is a used book - there is no escaping the fact it has been read by someone else and it will show signs of wear and previous use. Overall we expect it to be in very good condition, but if you are not entirely satisfied please get in touch with us.