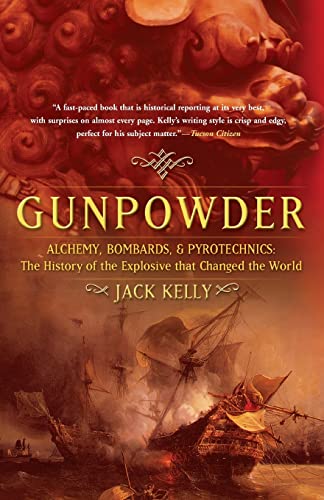 In Stock
$10.69
Gunpowder first emerged from the ancient Chinese alchemical experiments to usurp the sword, spear and arrow in war. A must-read for history fans and military buffs alike, "Gunpowder" brings together a rich terrain of cultures and technological innovations with authoritative research and swashbuckling style.
Like New
Only 1 left

Gunpowder: Alchemy, Bombards, and Pyrotechnics: The History of the Explosive that Changed the World by Jack Kelly

When Chinese alchemists fashioned the first manmade explosion sometime during the tenth century, no one could have foreseen its full revolutionary potential. Invented to frighten evil spirits rather than fuel guns or bombs,neither of which had been thought of yet,their simple mixture of saltpeter, sulfur, and charcoal went on to make the modern world possible. As word of its explosive properties spread from Asia to Europe, from pyrotechnics to battleships, it paved the way for Western exploration, hastened the end of feudalism and the rise of the nation state, and greased the wheels of the Industrial Revolution.With dramatic immediacy, novelist and journalist Jack Kelly conveys both the distant time in which the devil's distillate" rose to conquer the world, and brings to rousing life the eclectic cast of characters who played a role in its epic story, including Michelangelo, Edward III, Vasco da Gama, Cortes, Guy Fawkes, Alfred Nobel, and E. I. DuPont. A must-read for history fans and military buffs alike, Gunpowder brings together a rich terrain of cultures and technological innovations with authoritative research and swashbuckling style.

"Jack Kelly writes like a man ready for a rumble."
"A faced-paced book that is historical reporting at its very best, with surprises on almost every page. Kelly's writing style is crisp and edgy, perfect for his subject matter."

Jack Kelly is both an accomplished novelist and an experienced author of popular history. He writes regularly for American Heritage, and has also written features about the DuPont family's involvement in the gunpowder industry and the history of fireworks in America. He lives in Milan, New York.

CIN000151170
Gunpowder: Alchemy, Bombards, and Pyrotechnics: The History of the Explosive that Changed the World by Jack Kelly
Jack Kelly
Used - Like New
Paperback
INGRAM PUBLISHER SERVICES US
2005-04-06
272
0465037224
9780465037223
N/A
Book picture is for illustrative purposes only, actual binding, cover or edition may vary.
The book has been read, but looks new. The book cover has no visible wear, and the dust jacket is included if applicable. No missing or damaged pages, no tears, possible very minimal creasing, no underlining or highlighting of text, and no writing in the margins.