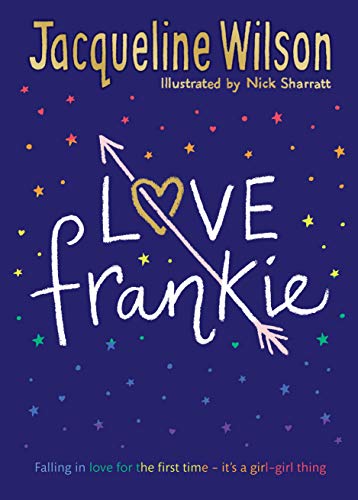 Used Price
$11.39
Free Shipping in the US
Reviews:
Trustpilot
Like New

GROWING UP. FALLING IN LOVE. COMING OUT.

Frankie is nearly fourteen and teenage life certainly comes with its ups and downs. Her mum is seriously ill with MS and Frankie can feel herself growing up quickly, no thanks to Sally and her gang of bullies at school.

When Sally turns out to be not-so-mean after all, they strike up a friendship and are suddenly spending all of their time together.

But Frankie starts to wonder whether these feelings she has for Sally are stronger than her other friendships. Might she really be in love?

Frankie doesn't want Sally to just be her friend. She wants her to be her girlfriend. But does Sally feel the same?

The must-have new novel about falling in love for the first time from bestselling, much-loved children's author, Jacqueline Wilson.

First love, eh? It never runs smooth. But who else would we turn to in order to reassure ourselves that it'll turn out alright in the end? Nobody but Jacqueline Wilson, of course! * Bookbag *
A powerful and important love story, this book explores coming of age and coming out. I hope it will give girls everywhere the courage and freedom to follow their hearts * Good Housekeeping *
There's a reason why Jacqueline Wilson has sold more than 40m books. Yet again she delivers a touching, bittersweet drama about ordinary, credible lives. The characterization is spot on, showing real insight into how today's youngsters think, talk and behave, and Frankie's story beautifully conveys the thrill of first love and the additional complications that being gay can bring to it * Financial Times *
I would have loved it as a younger teen. I'm so pleased for all the girls who will get to read this at the same age as Frankie and see themselves reflected in the pages * Lesbrary.com *
Whether you'll grab your hair in agony or cry silent tears for Frankie's broken heart, this one will stick with you for a while * The Nerd Daily *

Jacqueline Wilson (Author)
Jacqueline Wilson wrote her first novel when she was nine years old, and she has been writing ever since. She is now one of Britain's bestselling and most beloved children's authors. She has written over 100 books and is the creator of characters such as Tracy Beaker and Hetty Feather. More than forty million copies of her books have been sold.

As well as winning many awards for her books, including the Children's Book of the Year, Jacqueline is a former Children's Laureate, and in 2008 she was appointed a Dame.

Jacqueline is also a great reader, and has amassed over 20,000 books, along with her famous collection of silver rings.

Find out more about Jacqueline and her books at www.jacquelinewilson.co.uk

Nick Sharratt (Illustrator)
Nick Sharratt has written and illustrated many books for children including Shark in the Park, You Choose and Pants. He has won numerous awards for his picture books, including the Sheffield Children's Book Award and the 2001 Children's Book Award. He has also enjoyed stellar success illustrating Jacqueline Wilson's books. Nick lives in Hove.

GOR010809678
Love Frankie by Jacqueline Wilson
Jacqueline Wilson
Used - Like New
Hardback
Penguin Random House Children's UK
2020-04-30
432
0857535897
9780857535894
N/A
Book picture is for illustrative purposes only, actual binding, cover or edition may vary.
The book has been read, but looks new. The book cover has no visible wear, and the dust jacket is included if applicable. No missing or damaged pages, no tears, possible very minimal creasing, no underlining or highlighting of text, and no writing in the margins.