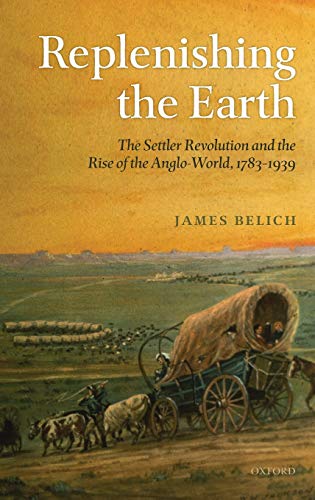 Used Price
$53.99
Free Shipping in the US
Pioneering study of the anglophone 'settler boom' in North America, Canada, South Africa, Australia, and New Zealand between the early 19th and early 20th centuries, looking at what made it the most successful of all such settler revolutions, and how this laid the basis of British and American power in the 19th and 20th centuries.
Reviews:
Trustpilot
Very Good

Replenishing the Earth: The Settler Revolution and the Rise of the Angloworld by James Belich (Professor of History, Stout Research Centre, Victoria University of Wellington)

Why does so much of the world speak English? Replenishing the Earth gives a new answer to that question, uncovering a 'settler revolution' that took place from the early nineteenth century that led to the explosive settlement of the American West and its forgotten twin, the British West, comprising the settler dominions of Canada, Australia, New Zealand, and South Africa. Between 1780 and 1930 the number of English-speakers rocketed from 12 million in 1780 to 200 million, and their wealth and power grew to match. Their secret was not racial, or cultural, or institutional superiority but a resonant intersection of historical changes, including the sudden rise of mass transfer across oceans and mountains, a revolutionary upward shift in attitudes to emigration, the emergence of a settler 'boom mentality', and a late flowering of non-industrial technologies -wind, water, wood, and work animals - especially on settler frontiers. This revolution combined with the Industrial Revolution to transform settlement into something explosive - capable of creating great cities like Chicago and Melbourne and large socio-economies in a single generation. When the great settler booms busted, as they always did, a second pattern set in. Links between the Anglo-wests and their metropolises, London and New York, actually tightened as rising tides of staple products flowed one way and ideas the other. This 're-colonization' re-integrated Greater America and Greater Britain, bulking them out to become the superpowers of their day. The 'Settler Revolution' was not exclusive to the Anglophone countries - Argentina, Siberia, and Manchuria also experienced it. But it was the Anglophone settlers who managed to integrate frontier and metropolis most successfully, and it was this that gave them the impetus and the material power to provide the world's leading super-powers for the last 200 years. This book will reshape understandings of American, British, and British dominion histories in the long 19th century. It is a story that has such crucial implications for the histories of settler societies, the homelands that spawned them, and the indigenous peoples who resisted them, that their full histories cannot be written without it.

original and intelligent * Times Higher Education Supplement *
[A] vast and vastly interesting book. * Australian Journal of Politics and History *
Replenishing the Earth is the biggest, boldest, most truly global [of the] "British World" histories. Book of the week. * Stephen Howe, The Independent *
This is one of the most important works on the broad processes of modern world history to have appeared for years - arguably since Sir Charles Dilke's pioneering Greater Britain introduced a concept very like Belich's "Anglo-world" to his Victorian contemporaries in 1868 * Bernard Porter, Times Literary Supplement *
Replenishing the Earth possesses grandeur of vision. It is written with great gusto in a vigorous quest for explanations of vital phenomena. It is exhilarating and provocative reading and grapples with central historical questions at a structural level which leaves this reader cheering its sheer bravado. * Eric Richards, Reviews in History *
Original and intelligent...this book offers a novel explanation of the rise of the Anglo-world... Whatever the future holds, their past is compellingly told here. * Donald MacRaild, Times Higher Education Supplement *
A provocative, empirically sound reexamination of the expansion of the English-speaking world in the late 19th century. * CHOICE *
A comprehensive survey of and challenge to the immense historiography on Anglophone settler expansions of the long nineteenth century...Teachers will find Replenishing the Earth a rich and provocative source at all collegiate levels...A goldmine for the particulars of growth and expansion. * World History Bulletin *
Useful not just for scholars comparing settler societies but for everyone working on nineteenth-century North America or Australasia...an impressive contribution both to settler history and to world history. * American Historical Review *
Comprehensive, highly original...and always fascinating account of Greater Britains will to power, with which account scholars perforce will grapple for years to come. * Peter A. Coclanis, Journal of Interdisciplinary History *
A great contribution to large-scale history: constantly sparkling in its style, humorous, and offering profound new insights. A magnificent book. * Jared Diamond, UCLA, Pulitzer-Prize-winning author of the best-sellers Guns, Germs, and Steel and Collapse *
Argued with wit and vigor, this ambitious book makes a provocative, multilayered contribution to comparative and transnational history. * Carl J. Guarneri, Journal of Diplomatic History *

James Belich is professor of history at the Stout Research Centre, Victoria University of Wellington. He previously held the inaugural Keith Sinclair Chair in History at the University of Auckland, and has held visiting positions at Cambridge, Melbourne, and Georgetown Universities. His earlier books, all award-winners, include a two volume general history of New Zealand, Making Peoples and Paradise Reforged, and The New Zealand Wars and the Victorian Interpretation of Racial Conflict, winner of the Trevor Reese Prize for an outstanding work of imperial or commonwealth history published in the preceding two years.