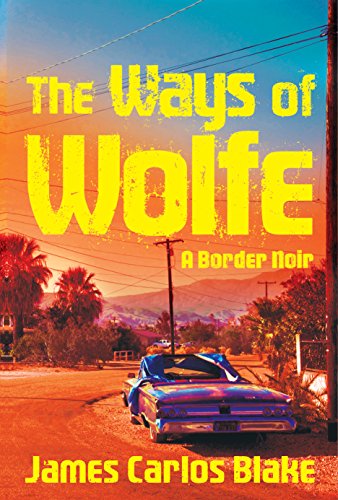 The Ways of Wolfe
by James Carlos Blake

Used Price
$17.49
Free Shipping in the US
From CWA Goldsboro Gold Dagger Award finalist James Carlos Blake, The Ways of Wolfe is a rousing novel about an imprisoned member of the outlaw Wolfe family who risks escape for the chance to see his long-lost daughter again
Reviews:
Trustpilot
Very Good

The Ways of Wolfe Summary

The Ways of Wolfe by James Carlos Blake

"James Carlos Blake has long been one of my favorites, but his Wolfe family saga may be his best work to date."--Ace Atkins, on The House of Wolfe

Los Angeles Times Book Prize winner James Carlos Blake delves back into the dark realms of the Wolfe family, a clan whose roots run deep on both sides of the United States-Mexico border, and whose prevailing interests straddle both sides of the law.

Twenty years ago, college student Axel Prince Wolfe--heir apparent to his Texas family's esteemed law firm and its "shade trade" criminal enterprises--teamed up with his best friend, Billy, and a Mexican stranger in a high-end robbery that went wrong. Abandoned by his partners, he was captured and imprisoned, his family disgraced, his wife absconded, his infant daughter Jessie left an orphan. Two decades later, with eleven years still to serve, Axel has long since exhausted his desire for revenge against the partners who deserted him. All he wants now is to see the woman his daughter has become, despite her lifelong refusal to acknowledge him. When the chance comes to escape in the company of Cacho, a young Mexican inmate with ties to a major cartel, Axel takes it, and a massive manhunt ensues, taking the pair down the Rio Grande and into a desert inferno. With his chance to see Jessie now within reach, a startling discovery re-ignites an old passion and sends Axel headlong toward reckonings many years in the making.

Racing across desolate landscapes from West Texas to the Gulf of Mexico, The Ways of Wolfe is the taut story of one man's love for a daughter he has never met and his fateful struggle with his own reckless spirit.

Customer Reviews - The Ways of Wolfe

The Ways of Wolfe Reviews

Praise for The Ways of Wolfe

"The Ways of Wolfe exhibits James Carlos Blake's hallmark fast-paced, pummeling style, but it also proves to be a character study and a sort of examination of the allure of the unlawful . . . A rewarding, vividly wrought, gripping ride."--Arizona Daily Star

"Atmospherically, the book is rich and intense. The hot southwestern border is as distinctive and central to the book as snowy Minnesota was for Fargo . . . Blake's world [is] filled with hard men and mute consciences. Fans of dark noir about the seedier aspects of humanity will find a lot to appreciate."--Strand Magazine

"You must read James Carlos Blake's books . . . every page, every paragraph, every book is a gem. His latest offering is no exception . . . [Blake's] characters are instantly memorable . . . his plots twisting and turning in their unpredictability from beginning to end . . . a dark, beautiful slice of border noir that continues Blake's multifaceted exploration of the Wolfe family. I hope that the series goes on forever."--Joe Hartlaub, Bookreporter

"Blake is a writer fans will follow anywhere. He brings the border to life with blunt precision and evokes the lionization of outlaws that can be found there . . . Extremely satisfying, right up to the noir ending."--Booklist

"James Carlos Blake has long been one of my favorites, but his Wolfe family saga may be his best work to date . . . Brilliant and uncompromising, Blake again proves why he's one of the best writers working today."--Ace Atkins, on The House of Wolfe

"A writer with as many fine and wonderful skills as those possessed by James Carlos Blake should be well-known and embraced."--Daniel Woodrell, on The House of Wolfe

"Suspenseful . . . Readers who enjoy action, adventure and lethal weaponry will relish every moment."--Washington Post, on The Rules of Wolfe

"[Blake] writes of grisly death and violence like a singing Gaelic bard . . . [A] tough, honed-to-the-bone thriller."--Dallas Morning News, on The Rules of Wolfe

"A hard-edged, fast-moving thriller that will hold your attention hostage--good luck getting away."--Booklist (starred review), on The House of Wolfe

James Carlos Blake is the author of thirteen novels, including The House of Wolfe, The Rules of Wolfe, which was shortlisted for the CWA Goldsboro Gold Dagger Award and named one of Booklist's Best 101 Crime Novels of the Past Decade, and Country of the Bad Wolfes. He is a member of the Texas Institute of Letters and a recipient of the Los Angeles Times Book Prize for In the Rogue Blood. He was born in Mexico, raised in Texas, and now lives in Arizona.

GOR010805591
The Ways of Wolfe by James Carlos Blake
James Carlos Blake
Border Noir
Used - Very Good
Hardback
Black Cat
2017-09-21
304
0802125778
9780802125774
N/A
Book picture is for illustrative purposes only, actual binding, cover or edition may vary.
This is a used book - there is no escaping the fact it has been read by someone else and it will show signs of wear and previous use. Overall we expect it to be in very good condition, but if you are not entirely satisfied please get in touch with us.