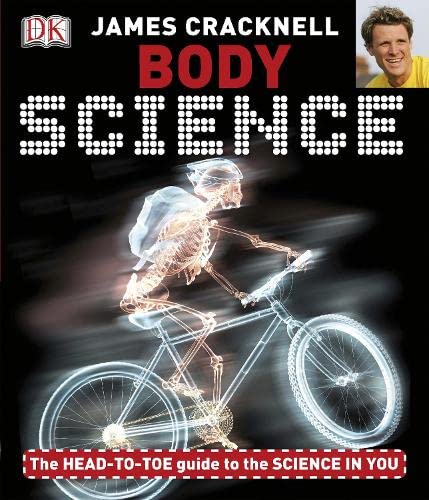 Used Price
$11.99
Free Shipping in the US
From friction to gravity, your body's a walking talking, living, breathing epicentre of science. This book examines the science behind the human body. It offers a tour through the incredible forces that make the human body such an amazing biological, physical and chemical machine.
Reviews:
Trustpilot
Like New Very Good Good

The science behind the human body

From friction to gravity, your body's a walking talking, living, breathing epicentre of science. Want to know how it all works?

Join James Cracknell as he sends your child on a tour through the incredible forces that make the human body such an amazing biological, physical and chemical machine.

They'll find out what makes their body go and take a look at the explosive energy that powers their muscles. Watch as they discover full-adrenaline thrills that test the body to the max and explore the bionic possibilities of the future!

If you want your child to know about the science behind their body systems, this is the ideal user's manual!

James Cracknell is one of Britain's most successful athletes, with two Olympic gold rowing medals and six World Rowing Championships to his name.

An experienced geography teacher with a continuing interest in children's education and furthering the understanding of science, Cracknell is ITV Sport's all-action reporter and a staff writer for The Telegraph. He has rowed across the Atlantic with TV presenter Ben Fogle, travelled under his
own steam to Africa from the UK for Sports Relief, and raced with with Ben Fogle to the South Pole - a feat that involved the application of cutting-edge science and technology.

Cracknell's love of competition has not diminished and he regularly takes part in marathons, triathlons, and adventure races, and he holds the record for paddling the English Channel on a surfboard.

GOR010808861
Body Science by James Cracknell
James Cracknell
Used - Like New
Hardback
Dorling Kindersley Ltd
2009-06-01
96
1405337370
9781405337373
N/A
Book picture is for illustrative purposes only, actual binding, cover or edition may vary.
The book has been read, but looks new. The book cover has no visible wear, and the dust jacket is included if applicable. No missing or damaged pages, no tears, possible very minimal creasing, no underlining or highlighting of text, and no writing in the margins.