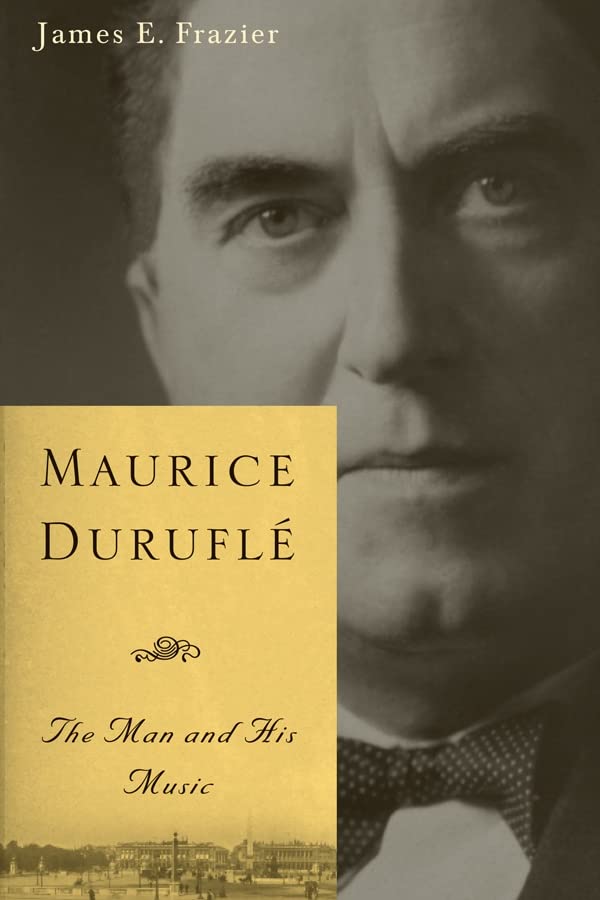 Maurice Durufle - The Man and His Music
by James E. Frazier

Used Price
$35.99
Free Shipping in the US
A deeply researched biography of the great French organist, who composed some of the best-loved works in the organ repertory -- and the masterful Requiem.
Reviews:
Trustpilot
Very Good

Maurice Durufle - The Man and His Music Summary

Maurice Durufle - The Man and His Music by James E. Frazier

Maurice Durufle: The Man and His Music is a new biography of the great French organist and composer (1902-86), and the most comprehensive in any language. James E. Frazier traces Durufle's musical training, his studies with Tournemire and Vierne, and his career as an organist, church musician, composer, recitalist, Conservatoire professor, and orchestral musician. Frazier also examines the career and contributions of Durufle's wife, the formidable organist Marie-Madeleine Durufle-Chevalier.
Durufle brought the church's unique language of plainsong into a compelling liaison with the secular harmonies of the modern French school (as typified by Debussy, Ravel, and Dukas) in works for his own instrument and in his widely loved masterpiece, the Requiem Op. 9 for soloists, chorus, organ, and orchestra.
Drawing on the accounts of those who knew Durufle personally as well as on Frazier's own detailed research, Maurice Durufle offers a broad sketch of this modest and elusive man, widely recognized today for having created some of the greatest works in the organ repertory -- and the masterful Requiem.

James E. Frazier holds advanced degrees in philosophy, organ, theology, and sacred music from St. Alphonsus College, Mt. St. Alphonsus Seminary, Hartt School of Music, the Yale University Divinity School, and the Yale Institute of Sacred Music. He served Episcopal churches in Hartford, Connecticut, and St. Paul, Minnesota, as organist and director of music. For ten years he was director of music for the Archdiocese of St. Paul and Minneapolis.

Customer Reviews - Maurice Durufle - The Man and His Music

Maurice Durufle - The Man and His Music Reviews

A mine of information . . . a veritable tale of our times. MUSICAL TIMES [Andrew Thomson]
Provides significant insight into Durufle's works and the relatively secretive life he and his wife led. . . . Frazier's research is excellent. . . . An important contribution. CHOICE [Brian Doherty]

Frazier's exploration of arabesque in architecture and music and his treatment of musical luminosity are memorably insightful and reveal a thoughtful understanding of Durufle's work. . . . An interesting and well-constructed view of Durufle's world, and a highly informative text as well. CHOIR & ORGAN [Steven Plank]

A work of unprecedented scope and depth, . . . [Frazier's book] is a biography abundantly rich in detail; though it declines the tone of a hagiography, it is obviously a labor of love. . . . Frazier skillfully illuminates the contexts in which Durufle's life unfolded . . . [and] Frazier's survey of Durufle's compositions is particularly strong. . . . A special pleasure of the book is the chapter on [Durufle's future wife, and a world-renowned organist,] Marie-Madeleine Chevalier . . . Frazier's book will no doubt stand as a defining work in Durufle scholarship and nurture scholars of 20th-century French organ music for years to come. AMERICAN ORGANIST [Lawrence Archbold]

One of the best musical biographies I have read for many years: sound in musical and, for the most part, in historical judgment . . . , sympathetic without being sycophantic, and most gracefully written. Durufle deserves no less. GRAMOPHONE [Roger Nichols]

[Frazier] sees Durufle as a compelling figure, given over to the same foibles and doubts we all have. Frazier's ability to obtain primary sources lends credence to his observations. This is a superb work, one to be valued by music historians and organists alike. AMERICAN RECORD GUIDE, Jan/Feb 2008 [Donald Metz]

This substantial study . . . although sympathetic . . . is not a work of hagiography. . . .[The author argues that] the somewhat short-lived revival of Gregorian chant in the French church . . . [during] Durufle's composing life was a happy coincidence from which music was the main beneficiary [notably through the widely beloved Requiem]. . . . The very considerable value of this book lies in its personal evaluation of a man whose personality is likely to remain something of a mystery but whose music has already transcended his life. TEMPO [Bret Johnson]

Durufle's Childhood and Early Education
Life at the Cathedral Choir School
Lessons with Charles Tournemire
Lessons with Louis Vierne
The Conservatoire Student
Durufle's Distinctions
The Contested Successions at Notre-Dame and Sainte Clotilde
Durufle's Peforming Career
The Orchestral Musician
The Poulenc Organ Concerto
Professor of Harmony at the Paris Conservatoire
Marie-Madeleine Chevalier
Overview of Durufle's Compositions
Durufle's Compositions: Their Genesis and First Performance
Durufle's Role in the Plainsong Revival
The Vichy Commissions
The Requiem
The Musical History of Saint Etienne-du-Mont
The Organs at Saint Etienne-du-Mont
Durufle as Organist and Teacher
Durufle and Organ Design
The Church in Transition
The North American Tours
The Man Durufle

GOR010805629
Maurice Durufle - The Man and His Music by James E. Frazier
James E. Frazier
Used - Very Good
Paperback
Boydell & Brewer Ltd
2019-03-26
408
1580469604
9781580469609
N/A
Book picture is for illustrative purposes only, actual binding, cover or edition may vary.
This is a used book - there is no escaping the fact it has been read by someone else and it will show signs of wear and previous use. Overall we expect it to be in very good condition, but if you are not entirely satisfied please get in touch with us.