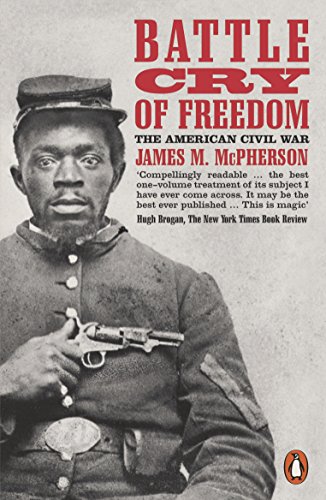 In Stock
$19.49
Recounts the momentous episodes that preceded the Civil War including the Dred Scott decision, the Lincoln-Douglas debates, John Brown's raid on Harper's Ferry.
Very Good Good
12 in stock

Winner of the Pulitzer Prize for History

'Read it. It will open your eyes about race history in America. It will shock you for what it tells you about politics in America today.' Richard Ford

'Compellingly readable ... the best one-volume treatment of its subject I have ever come across. It may be the best ever published ... This is magic' The New York Times

This book covers one of the most turbulent periods of the USA's history, from the Mexican War in 1848 to the end of the Civil War in 1865. With a broad historical sweep, it traces the heightening sectional conflict of the 1850s: the growing estrangement of the South and its impassioned defence of slavery; the formation of the Republican Party in the North, with its increasing opposition to slavery; and the struggle over territorial expansion, with its accompanying social tensions and economic expansion. The whole panorama of the Civil War is captured in these pages, from the military campaign, which is described with vividness, immediacy, a grasp of strategy and logistics, and a keen awareness of the military leaders and the common soldiers involved, to its political and social aspects.

The definitive study, meticulous in its scholarship and compulsive in its readability * Financial Times *
McPherson is wonderfully lucid... Above all, everything is in a living relationship with everything else ... Omitting nothing important, whether military, political or economic, he yet manages to make everything he touches drive the narrative forward ... historical writing of the highest order * The New York Times *
A distinguished contribution to American history ... He has succeeded brilliantly. He has written what will surely become the standard one-volume history of the great conflict which forged America as a united nation * Independent *
Absolutely brilliant ... McPherson has fresh approaches to the war's background, the four years of struggle and the aftermath * Washington Post Book World *
McPherson wears with equal ease the hats of biographer, economist, sociologist and military historian .. Probably the best single-volume history of America's Civil War yet written * Economist *

James McPherson is Professor Emeritus of American History at Princeton University. Battle Cry of Freedom won the Pulitzer Prize for non-fiction in 2003.

Prologue: from the halls of Montezuma. The United States of midcentury; Mexico will poison us; an empire for slavery; slavery, rum and Romanism; the crime against Kansas; mudsills and greasy mechanics for A. Lincoln; the revolution of 1860; the counterrevolution of 1861; facing both ways - the upper south's dilemma; amateurs go to war; farewell to the 90 Days' War; blockade and beachead - the Salt-Water War, 1861-1862; the River War in 1862; the sinews of war; Billy Yank's chickhominy blues; we must free the slaves or be ourselves subdued; carry me back to Old Virginny; John Bull's Virgina Reel; three rivers in winter, 1862-1863; fire in the rear; long remember - the summer of '63; Johnny Reb's Chattanooga Blues; when this cruel war is over; if it takes all summer; after four years of failure; we are going to be wiped off the Earth; South Carolina must be destroyed; we are all Americans. Epilogue: to the shoals of victory.

GOR001244389
Battle Cry of Freedom: The Civil War Era by James M. McPherson
James M. McPherson
Used - Very Good
Paperback
Penguin Books Ltd
1990-03-29
944
0140125183
9780140125184
N/A
Book picture is for illustrative purposes only, actual binding, cover or edition may vary.
This is a used book - there is no escaping the fact it has been read by someone else and it will show signs of wear and previous use. Overall we expect it to be in very good condition, but if you are not entirely satisfied please get in touch with us.