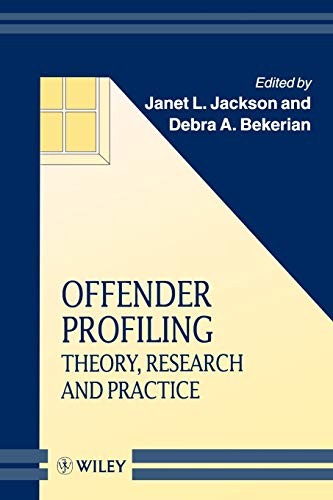 Used Price
$11.99
Free Shipping in the US
This book places offender profiling within a more realistic, balanced context. Initial chapters introduce a theoretical, empirical basis for the approach, and are followed by chapters illustrating the pros and cons of its use in an applied, operational setting.
Reviews:
Trustpilot
Like New Very Good

Most incidents of violent crime occur between people who know each other, but in other cases (fortunately much less frequent) there are no obvious ties between the victim and the criminal, and these cases cause a great deal of social fear and uncertainty. They also result in large-scale, costly investigations and, increasingly, police are collaborating with other professionals in a process of offender profiling which might help their investigation. This book is a substantial, unique and critical account of the scope and practice of offender profiling, and its limitations. Professionals worldwide, from psychiatry, psychology, criminology and policing, have contributed accounts of their experience and knowledge across a range of approaches to offender profiling. Some use a clinical approach, based on the application of established theories of personality and psychopathy. Others argue for the effectiveness of the objective analysis of offence records to predict future offending. Some of the police contributions provide a frank description of their methods, others address the difficult issues relating to the use of offender profiling. This is a controversial subject, full of potent myth, and the object of this book is to provide a cool overview of the related scientific knowledge, now spread over many journals and reports, as well as accounts of the process and difficulties of offender profiling. It will be useful and interesting to most scientists and professionals in the field of criminal justice. This book is in the Wiley Series in the Psychology of Crime, Policing and Law.

Janet L. Jackson and Debra A. Bekerian are the authors of Offender Profiling: Theory, Research and Practice, published by Wiley.

GOR010335687
Offender Profiling: Theory, Research and Practice by Janet L. Jackson
Janet L. Jackson
Wiley Series in Psychology of Crime, Policing and Law
Used - Like New
Paperback
John Wiley & Sons Inc
1997-10-23
256
0471975656
9780471975656
N/A
Book picture is for illustrative purposes only, actual binding, cover or edition may vary.
The book has been read, but looks new. The book cover has no visible wear, and the dust jacket is included if applicable. No missing or damaged pages, no tears, possible very minimal creasing, no underlining or highlighting of text, and no writing in the margins.