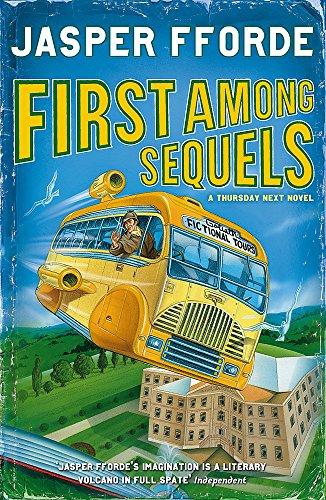 First Among Sequels
by Jasper Fforde

First Among Sequels: Thursday Next Book 5 by Jasper Fforde

The fifth book in the phenomenally successful Thursday Next series, from Number One bestselling author Jasper Fforde.

Fourteen years after she pegged out at 1988 SuperHoop, Thursday Next is grappling with a recalcitrant new apprentice, the death of Sherlock Holmes and the inexplicable departure of comedy from the once-hilarious Thomas Hardy novels.

Her idle sixteen-year-old would rather sleep all day than save the world from imminent destruction, the government has a dangerously high stupidity surplues, and the Stiltonista Cheese Mafia are causing trouble for Thursday in her hometown of Swindon.

Then things begin to get bad. As Reality Book Shows look set to transplant Reality TV Shows and Goliath invent a trans-fictional tourist coach, Thursday must once again have her wits about her as she travels to the very limits of acceptable narrative possibilities to rescue the reading experience from almost certain destruction . . .

'Once you read one - you'll be hooked.' * David Baldacci *
'Fforde's books are more than just an ingenious idea. They are written with buoyant zest and are tautly plotted. They have empathetic heroes and heroines who nearly make terrible mistakes and suitably dastardly villains who do. They also have more twists and turns than Christie, and are embellished with the rich details of Dickens or Pratchett' * Independent *
A riot of puns, in-jokes and literary allusions that Fforde carries off with aplomb * Daily Mail *
'Fforde is a master entertainer, and a wordsmith of dexterous genius.' * Scotsman *
'Fans of the late Douglas Adams, or, even, Monty Python, will feel at home with Fforde' * Herald *

GOR001239622
First Among Sequels: Thursday Next Book 5 by Jasper Fforde
Jasper Fforde
Thursday Next
Used - Very Good
Paperback
Hodder & Stoughton General Division
2008-07-01
416
0340752025
9780340752029
N/A
Book picture is for illustrative purposes only, actual binding, cover or edition may vary.
This is a used book - there is no escaping the fact it has been read by someone else and it will show signs of wear and previous use. Overall we expect it to be in very good condition, but if you are not entirely satisfied please get in touch with us.