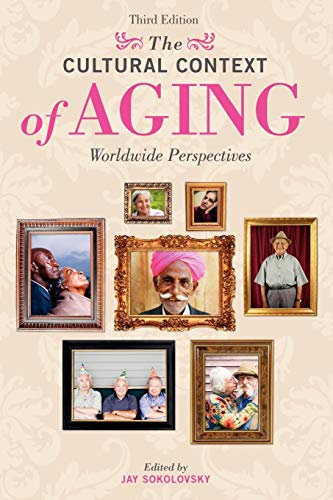 The Cultural Context of Aging
by Jay Sokolovsky

Used Price
$17.99
Free Shipping in the US
Explores various cultural issues worldwide that affect aging issues, from perception and valuation of the elderly to aspects including homelessness, care-giving, assisted suicide, psychological support and responses to those with dementia. This book includes special student resources, data from studies, and a bibliography of related readings.
Reviews:
Trustpilot
Very Good Good

The Cultural Context of Aging Summary

The consequences of global aging will influence virtually all areas of life to be encountered in the 21st century, including the biological limits of healthy longevity, the generational contract and nature of family ties, the makeup of households and communities, symbolic representations of midlife and old age and attitudes toward disability and death. The new edition (3rd) of the award winning book The Cultural Context of Aging: World-Wide Perspectives covers all these topics and more. This unique volume uses a qualitative, case study approach to look at the rapidly emerging new cultural spaces and social scripts through which mid and late life are being encountered globally. It is completely revised with over thirty new original works covering China, Japan, Denmark, India, Indonesia, Mexico, Peru, indigenous Amazonia, rural Italy and the ethnic landscape of the U.S.

A new feature of the book includes an integrated set of web book articles listed in the table of contents and available on the book's web site: (www.stpt.usf.edu/jsokolov/webbook). This is in addition to the largest web support of its kind providing literature updates, educational activities and even access to power points, graphics and video supplementing the text.

In this one of a kind edited text, readers will encounter the laughing clubs of India, the centenarian diet plan of Okinawa, the waltzing elders of urban China, aging in a true woman-centered society, the elderscapes of Florida, the challenge of "Conscious Aging," Japan's robotic granny minders, Denmark's "Flexsecurity" long-term care system; the Midwest's elder-friendly communities, "Eldertopia" and the "Green House" model for dementia care. Welcome to your future!

The Cultural Context of Aging Reviews

"This third edition of the study of aging in many cultures, edited by Sokolovsky (anthropology, University of South Florida) has been much expanded and updated. . . . The book is replete with supporting statistics, notes and an extensive bibliography." - Reference & Research Book News

JAY SOKOLOVSKY is Professor and Director of Anthropology at the University of South Florida, St. Petersburg. Sokolovsky specializes in cross-cultural, comparative gerontology and has written several books, as well as more than 30 articles and book chapters, dealing with this subject. In his research he has studied aging in a Mexican peasant village, New York's inner-city, Tampa, Florida, the new town of Columbia, Maryland, and in urban neighborhoods in Croatia and England. He has edited Growing Old in Different Societies and is coauthor of Old Men of the Bowery. Sokolovsky is cofounder and former President of the Association of Anthropology and Gerontology, former President of the Association of Anthropology and Gerontology, and Founder of the International Commission on Aging of the International Union of Anthropological and Ethnological Sciences.

CIN000418333
The Cultural Context of Aging: Worldwide Perspectives, 3rd Edition by Jay Sokolovsky
Jay Sokolovsky
Used - Very Good
Paperback
ABC-CLIO
2008-12-30
808
0275993027
9780275993023
N/A
Book picture is for illustrative purposes only, actual binding, cover or edition may vary.
This is a used book - there is no escaping the fact it has been read by someone else and it will show signs of wear and previous use. Overall we expect it to be in very good condition, but if you are not entirely satisfied please get in touch with us.