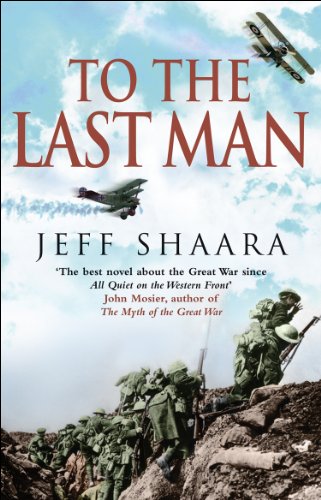 To The Last Man
by Jeff Shaara

In Stock
$9.69
Spring 1916, and three great armies - French, British and, on the other side of the wire, German - are locked in a stalemate of mud and blood on Europe's Western Front.
Very Good
Only 2 left

To The Last Man Summary

To The Last Man by Jeff Shaara

Spring 1916, and three great armies - French, British and, on the other side of the wire, German - are locked in a stalemate of mud and blood on Europe's Western Front. On the ground, young British soldiers lose their innocence in the hell that is No Man's Land, while in the skies above the trenches a new breed of warrior, armed with a devastating new weapon, comes of age. As the conflict stretches into its third year, a neutral but woefully unprepared and ill-equipped America is slowly goaded into war. It falls to General John Pershing to galvanise his country's army into readiness and as the first American troops reach the front in 1917, the world waits to see if the tide of a war that has already cost millions of lives can at last be turned. Combining an historian's eye for detail with a novelist's understanding of man's hopes and fears, Shaara carries the reader into the hearts and minds of some of the war's most memorable characters, from the heroic to the infamous, and vividly brings to life one of the greatest conflagrations in human history.

To The Last Man Reviews

"'A gripping account of World War I - from tactics to strategy. The reader feels the horror of the trenches in France' " * General Tommy Franks (US Army, Ret'd) *
"'The best novel about the Great War since Remarque's All Quiet on the Western Front...compelling, authentic, and imaginative'" * John Mosier, author of 'The Myth of the Great War' *
"'A riveting masterpiece revolving around the ghastly conflict that still profoundly defines the world we live in' " * Steve Forbes *
"'Shaara has demonstrated that rarest of writing gifts, making literature read like history and history read like literature...he brings World War I to pulsating life'" * Joseph Persico, author of '11th Month, 11th Day, 11th Hour: Armistice Day 1918' *
"'An epic account...a gruesomely graphic portrayal of the brutality and folly of total war...his descriptions of individual combat in the air and the mass slaughter on the ground are stark, vivid and gripping. He also offers compelling portraits of the politicians and generals whose strategies and decisions killed millions and left Europe a discontented wasteland'" -- Publishers Weekly

Jeff Shaara is the New York Times bestselling author of The Glorious Cause, Rise to Rebellion and Gone for Soldiers, as well as Gods and Generals and The Last Full Measure - two novels that complete the Civil War trilogy that began with his father's Pulitzer Prize-winning classic The Killer Angels. Shaara was born in 1952 into a family of Italian immigrants in New Brunswick, New Jersey. He grew up in Tallahassee, Florida, and graduated from Florida State University. He lives in Missoula, Montana. Visit the author online at www.JeffShaara.com

GOR001248923
To The Last Man by Jeff Shaara
Jeff Shaara
Used - Very Good
Paperback
Transworld Publishers Ltd
2006-01-02
848
055381740X
9780553817409
N/A
Book picture is for illustrative purposes only, actual binding, cover or edition may vary.
This is a used book - there is no escaping the fact it has been read by someone else and it will show signs of wear and previous use. Overall we expect it to be in very good condition, but if you are not entirely satisfied please get in touch with us.