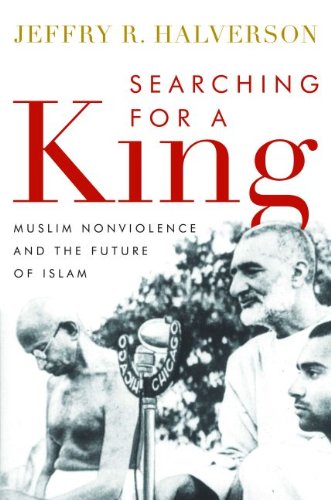 Searching for a King
by Jeffry R. Halverson

Used Price
$14.39
Free Shipping in the US
At a time when violent images of the Muslim world dominate our headlines, Western audiences are growing increasingly interested in a different picture of Islam, specifically the idea of Muslim nonviolence, and what it could mean for the world.
Reviews:
Trustpilot
Very Good

Searching for a King Summary

Searching for a King: Muslim Nonviolence and the Future of Islam by Jeffry R. Halverson

At a time when violent images of the Muslim world dominate our headlines, Western audiences are growing increasingly interested in a different picture of Islam, specifically the idea of Muslim nonviolence, and what it could mean for the world. But is nonviolence compatible with the teachings of Islam? Is it practical to suggest that Muslim societies must adopt nonviolence to thrive in today's world? Where is the Muslim equivalent of a Mahatma Gandhi or Martin Luther King Jr.? Searching for a King offers a comprehensive look into Islamic conceptions of nonviolence, its modern champions, and their readings of Islam's sacred texts, including the Qur'an and traditions of the Prophet Muhammad. Jeffry R. Halverson asserts that the foundation for nonviolence in Islam already exists. He points to the exemplary lives and teachings of modern Muslim champions of nonviolence, little known in the Western world. Using rich historical narratives and data from leading international agencies, he also makes the case that by eliminating the high costs of warfare, nonviolence opens the door to such important complementary initiatives as microfinancing and women's education programs. Ultimately, Halverson endorses Muslim champions of nonviolence and argues for the formulation of a nonviolent version of jihad as an active mode of social transformation.

Customer Reviews - Searching for a King

Searching for a King Reviews

"Jeffry Halverson has written a book of extreme importance for our times. Searching for a King is a well-researched, meaningful, and much-needed volume that convincingly rebuts a narrative of violence that has for too long dominated discussions of Islam and Muslims. Offering a glimpse into the lives and works of five champions of peace, he reveals hidden beautiful teachings and unsung courageous acts that tell a different, inspiring story. Anyone who values peace and desires more equality in the world owes it to himself or herself to read this book."--Nathan Lean, author of The Islamophobia Industry: How the Right Manufactures Fear of Muslims--Nathan Lean
"The inspiring, informative, and well-documented narratives of Muslim champions of nonviolence presented in Searching for a King make a coherent and powerful case for Islamic nonviolence today."--Abdullahi Ahmed An-Na'im, professor at Emory Law School and author of Islam and the Secular State--Abdullahi Ahmed An-Na'im

JEFFRY R. HALVERSON is an Islamic studies scholar and historian of religions, specializing in Egypt and the Middle East. He currently serves as an assistant research professor in the Hugh Downs School of Human Communication at Arizona State University - Tempe. He is the author of Theology and Creed in Sunni Islam (Palgrave Macmillan, 2010) and lead author of Master Narratives of Islamist Extremism (Palgrave Macmillan, 2011). He lives in Phoenix, Arizona.

GOR010714886
Searching for a King: Muslim Nonviolence and the Future of Islam by Jeffry R. Halverson
Jeffry R. Halverson
Used - Very Good
Hardback
Potomac Books Inc
2012-08-31
192
1612344690
9781612344690
N/A
Book picture is for illustrative purposes only, actual binding, cover or edition may vary.
This is a used book - there is no escaping the fact it has been read by someone else and it will show signs of wear and previous use. Overall we expect it to be in very good condition, but if you are not entirely satisfied please get in touch with us.