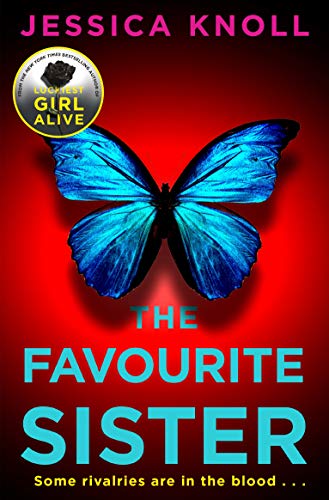 The Favourite Sister
by Jessica Knoll

The Favourite Sister by Jessica Knoll

From the author of the bestselling Luckiest Girl Alive comes Jessica Knoll's thriller, The Favourite Sister, which follows a pair of competitive and uber-successful sisters whose secrets and lies result in murder. Perfect for fans of Liane Moriarty's Nine Perfect Strangers and Caroline Kepnes' You.

Brett and Kelly Courtney are the shining jewels in a New York-based reality TV show called Goal Diggers. One of the most popular shows on American national television, its fiercely competitive cast of five self-made women are defined by their success, beauty and ruthless drive to reach the top by whatever means necessary.

The Courtney sisters' rivalry goes skin deep despite the blossoming business they have built together that helps disadvantaged women in Morocco. Harbouring bitter jealousies and dark secrets about their manufactured screen lives they're joined by three other hyper-competitive women who all have their own agendas. And the latest season promises sparks to fly in the quest for even higher ratings.

Vicious backstabbing, scathing social media attacks and finely-tuned scripting draw in the viewing public every week, all orchestrated by the show's omnipotent producers. But even they don't know that season four will end in murder . . .

Knife-sharp and enthralling, Jessica Knoll's The Favorite Sister is as bold and smart and audacious a novel about women and ambition as you could hope for. A more-than-worthy follow-up to Luckiest Girl Alive, it proves Knoll is a literary force to be reckoned with -- Megan Abbott
You'll be seeing this pink umbrella on beaches everywhere this summer * Elle *
The unexpected and unpredictable twists and surprising revelations will delight suspense fans * Library Journal *
Picture a fictional feminist reality TV show that's basically The Real Housewives of Startup Boardrooms. We find out early that one of the five castmates is dead, but we have no idea who did it, or why. This is the kind of soapy, hilariously vicious book you'll gobble up in one sitting * Marie Claire *
In the end, murder seems inevitable. Season 4 will end with a bang, and there will be blood . . . salaciously entertaining * Kirkus Reviews *
Knoll's novel is most notable as a potent take down of a reality-show-obsessed culture that seeks out the spotlight rather than harder truths * Publishers Weekly *
We don't want to give too much away, but you won't be able to put this one down - no matter how good the water looks * Good Housekeeping *
A twisty, sexy thriller, jam-packed with wit and snark * Glamour *
A binge-worthy beach read complete with the provocative twists and turns of a whodunit * USA Today *
Engrossing . . . deliciously savage and wildly entertaining * People *

Jessica Knoll has been a senior editor at Cosmopolitan and the articles editor at SELF, and has also written articles for the New York Times. She grew up in the suburbs of Philadelphia and graduated from The Shipley School in Bryn Mawr, Pennsylvania, and from Hobart and William Smith Colleges in Geneva, New York. She lives in New York City with her husband. She is also the author of Luckiest Girl Alive.

GOR010090119
The Favourite Sister by Jessica Knoll
Jessica Knoll
Used - Very Good
Paperback
Pan Macmillan
2019-09-05
512
1509839976
9781509839971
N/A
Book picture is for illustrative purposes only, actual binding, cover or edition may vary.
This is a used book - there is no escaping the fact it has been read by someone else and it will show signs of wear and previous use. Overall we expect it to be in very good condition, but if you are not entirely satisfied please get in touch with us.