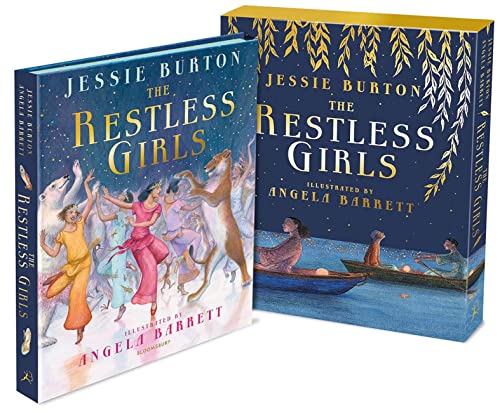 The Restless Girls
by Jessie Burton

A stunning deluxe edition of Jessie Burton's dazzling feminist fairytale. Illustrated by Angela Barrett, this extra-special edition includes an exclusive print and gorgeous sprayed edges, all enclosed in a beautiful slipcase. An essential gift, this inspirational story is a modern classic to be handed down from mother to daughter for generations 'A fierce fairytale for the rebel girl' KIRAN MILLWOOD HARGRAVE 'A magical modern retelling of an old fairytale ... Exquisite' JACQUELINE WILSON 'A complete revelation' THANDIE NEWTON 'Wild, wise, generous, ferocious' KATHERINE RUNDELL For her twelve daughters, Queen Laurelia's death in a motor car accident is a disaster beyond losing a mother. Their father, King Alberto, cannot bear the idea of the princesses ever being in danger and decides his daughters must be kept safe at all costs. Those costs include their lessons, their possessions and, most importantly, their freedom. But the eldest, Princess Frida, will not bend to his will without a fight and she still has one possession her father can't take: the power of her imagination. And so, with little but wits and ingenuity to rely on, Frida and her sisters begin their fight to be allowed to live.

This is a magical modern retelling of an old fairytale - the exquisite text and illustrations work in perfect harmony * Jacqueline Wilson *
It's critical what we read our kids ... Jessie Burton has very cleverly has taken a fairytale that was already standing and loved, but has reframed it. It's asking you to think of yourself and value yourself in terms other than the way you look, and just that - that one tiny aspect of the book - alone, was, to me, just a complete revelation * Thandie Newton *
A tale to read to your children (of both genders) over and over, and for them to read to theirs. It's a book that glows * Katherine Rundell *
A beautifully realised, whirling adventure full of the dark glitter of growing up, The Restless Girls is a fierce fairytale for the rebel girl - and boy - generation * Kiran Millwood Hargrave *
A story of love, loss, grief, and a desperate yearning for freedom, told with breathtaking compassion and wisdom * Louise O'Neill, author of The Surface Breaks *
A riveting feminist retelling, filled with excitement, imagination, magic, and just the right touch of darkness. These twelve fierce heroines will be a pleasure to return to again and again * Madeline Miller *
[Burton] fleshes out this traditional fairytale with personality ... Angela Barrett's illustrations, meanwhile, add an exotic visual richness to Burton's painterly descriptions of the princesses' enchanted underworld * Irish Times *
A feminist fairytale about finding one's inner lioness and about picking a battle very much worth fighting ...This brilliant reimagining of Grimms' tale The Twelve Dancing Princesses completely subverts the fairytale genre. Gone are insipid, demure 'weaker sex' princessy-princesses and enter feisty and passionate girls who trail-blaze their way into a better life ... This would be perfect for children in upper key stage 2 and would work well alongside our sequences for The Sleeper and The Spindle, The Lost Happy Endings and The Princess' Blankets * The Literary Curriculum *
I read The Restless Girls with my young niece and nephews. Long after they had fallen asleep, I was still reading ... Refreshing and empowering and utterly impossible to put down ... An exciting and magical tale of joy, love and the courage of twelve girls to be wholly themselves * Dr. Alaa Murabit *

Jessie Burton was born in 1982 and went to school in south London. Her favourite subjects were story writing, sleeping and ice-cream eating. After studying at Oxford University she went on to the Royal Central School of Speech and Drama. She worked as an actress and a PA before her first novel, The Miniaturist, was published. The Miniaturist was translated into 38 languages and has sold over a million copies around the world. Her second novel, The Muse, was published in July 2016 and is also a no.1 bestseller. Angela Barrett studied at Maidstone College of Art and the Royal College of Art. She has taught Illustration at Cambridge College of Technology and Drawing at Chelsea College and is widely regarded as one of the UK's finest illustrators. She won the 1989 Smarties Book Prize for Can It Be True? and has been shortlisted three times for the Kurt Maschler Award and once for the Kate Greenaway Medal.

GOR010074895
The Restless Girls: Deluxe Slipcase Edition by Jessie Burton
Jessie Burton
Used - Very Good
Hardback
Bloomsbury Publishing PLC
2018-09-27
160
1408897539
9781408897539
N/A
Book picture is for illustrative purposes only, actual binding, cover or edition may vary.
This is a used book - there is no escaping the fact it has been read by someone else and it will show signs of wear and previous use. Overall we expect it to be in very good condition, but if you are not entirely satisfied please get in touch with us.