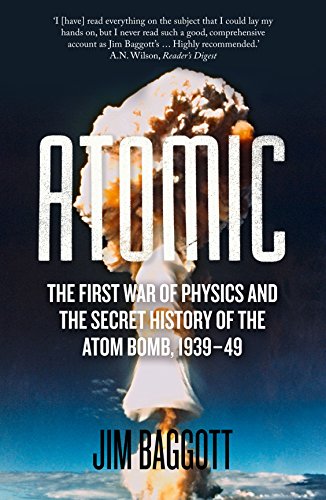 Used Price
$10,39
Free Shipping in the US
Drawing on declassified material such as MI6's Farm Hall transcripts, coded Soviet messages cracked by American cryptographers in the Venona project, and interpretations by Russian scholars of documents from the Soviet archives, Atomic presents a brilliant new account of the race to build humankind's most destructive weapon.
Reviews:
Trustpilot
Very Good

Atomic: The First War of Physics and the Secret History of the Atom Bomb 1939-49 by Jim Baggott

Spanning ten historic years, from the discovery of nuclear fission in 1939 to `Joe-1', the first Soviet atomic bomb test in August 1949, Atomic is the first fully realised popular account of the race between Nazi Germany, Britain, America and the Soviet Union to build atomic weapons. Rich in personality, action, confrontation and deception, Jim Baggott's book tells an epic story of science and technology at the very limits of human understanding.

`I [have] read everything on the subject that I could lay my hands on, but I never read such a good, comprehensive account as Jim Baggott's... Highly recommended.' -- Reader's Digest
'High drama... fascinating reading.' -- BBC Focus Magazine
`Grimly compelling. Thorough and accessible.' -- Daily Telegraph
`The best popular science book of the year to date by far.' -- Popular Science
`Baggott's investigation is an accessible account of the race to build the world's first atomic weapons. Compelling.' -- Good Book Guide
`Atomic is the tale of the creation of the Atomic bomb during wartime, and the political fallout from the realization of these powerful weapons... Most importantly Atomic is about the people and personalities behind the bomb... It's a disturbing book - simply because it's a very disturbing story.' -- Book Geeks
`Comprehensive and clear-flowing book by Jim Baggott... the real nub of this thriller of a book: the human brain is the thing that fills you wit fearful awe.' -- Diplomat Magazine
`This is an excellent example of popular science, explaining a series of difficult concepts clearly and coherently, but without sacrificing accuracy. When combined with the personal stories of the scientists the result is an excellent study of the development of the first atomic bomb.' -- History of War
`Jim Baggott's clear, elegant prose never falters, whether unveiling the scientists and spies who raced to unlock the secrets of the atom bomb, or describing the sub-atomic particle which drove the physicists on to what J Robert Oppenheimer later called 'sin'.' -- Telegraph
'An excellent introduction to a vast and complicated topic.' * Michael Dobbs, New York Times *
'Atomic provides a popular but informed and compelling account of the international competition to produce atomic weapons.' * Chemistry World *

Jim Baggott is an award-winning science writer. A former academic chemist,he runs an independent management consultancy practice but maintains a broad interest in science, philosophy and history and continues to write on these subjects in his spare time, for, amongother publications, New Scientist magazine. His previous bookshave been widely acclaimed and include A Beginner's Guide to Reality (Penguin, 2005) and Beyond Measure: Modern Physics,Philosophy and the Meaning of Quantum Theory (OUP, 2004).

GOR006912510
Atomic: The First War of Physics and the Secret History of the Atom Bomb 1939-49 by Jim Baggott
Jim Baggott
Used - Very Good
Paperback
Icon Books Ltd
2015-07-02
576
1848319924
9781848319929
N/A
Book picture is for illustrative purposes only, actual binding, cover or edition may vary.
This is a used book - there is no escaping the fact it has been read by someone else and it will show signs of wear and previous use. Overall we expect it to be in very good condition, but if you are not entirely satisfied please get in touch with us.