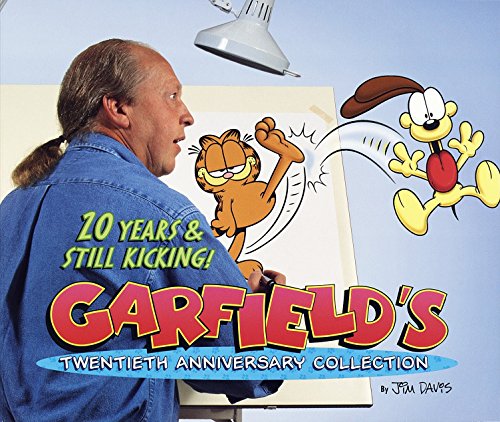 In Stock
$12.39
Laugh along with Garfield and the gang in this tribute to the feisty feline. Features include: Jim Davis's top 20 favourite cartoon strips; doodles, trivia and anecdotes; embarrassing photographs; and a 20th anniversary interview with Garfield.
Very Good Good
5 in stock

20 YEARS OF FABULOUS FELINE FUN!
Laugh along with Garfield and the gang in this timely tribute to the world's feistiest--and funniest--feline!
Inside you'll find:
; ; Jim Davis' Top Twenty All-Time Favorite Strips!
; ; Foreword by Mike Peters!
; ; Exclusive 20th Anniversary Interview with Garfield!
; ; A Rare Glimpse Inside Jim Davis' Original Sketchbook!
; ; A Heaping Helping of Classic Garfield Strips!
; ; Doodles, Trivia, Anecdotes!
; ; Embarrassing Photos!
It's nothing less than a milestone for Garfield and a must-have collection for every fat cat fanatic!

Jim Davis was born on July 28, 1945, in Marion, Indiana. He later attended Ball State University in Muncie, Indiana, where he distinguished himself by earning one of the lowest cumulative grade point averages in the history of the university. The Garfield strip was born on June 19, 1978, syndicated in forty-one U.S. newspapers. Today it's syndicated in more than 2,100 newspapers worldwide with more than 200 million readers, leading Guinness World Records to name Garfield The Most Widely Syndicated Comic Strip in the World. Davis has had many successes with Garfield, including four Emmy Awards for Outstanding Animated Program and induction into the Licensing Hall of Fame (1998), but his most prized awards are from his peers in the National Cartoonist Society: Best Humor Strip (1981 and 1985), the Elzie Segar Award (1990), and the coveted Reuben Award (1990) for overall excellence in cartooning.

GOR001226692
Garfield 20th Anniversary by Jim Davis
Jim Davis
Used - Very Good
Paperback
Cornerstone
1998-04-15
192
0345421264
9780345421265
N/A
Book picture is for illustrative purposes only, actual binding, cover or edition may vary.
This is a used book - there is no escaping the fact it has been read by someone else and it will show signs of wear and previous use. Overall we expect it to be in very good condition, but if you are not entirely satisfied please get in touch with us.