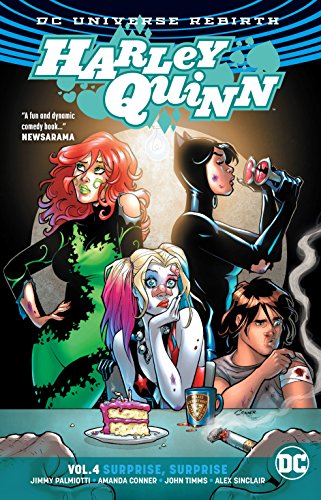 Harley Quinn's got her own definition of family. The gang of misfits, weirdos and two-fisted freaks she's assembled in her Brooklyn crash pad are all the family a reformed psychotic super-villain could ask for, ya know?

But that's all about to change. The Mistress of Mayhem is about to face the biggest shock she's seen in years...a visit from her parents.

That's right, folks--Mr. and Mrs. Quinzel are in town to take a bite of the Big Apple and meet their li'l monster's new crew, from her gal-pal Poison Ivy to her super-friend Power Girl and more. And since "alternative lifestyle" barely begins to describe the vida loca that Harley's livin', our bat-wielding bombshell's more than a little mortified.

But it turns out the crazy apple doesn't fall far from the twisted tree. Harley's mom and pop have quite a few skeletons in their own closet and no shortage of tricks up their sleeves. And before Harley's big birthday blowout, every secret's about to come out!

Harley Quinn super team Jimmy Palmiotti and Amanda Conner continue their classic run on one of the most iconic--and ironic--heroines in comics with HARLEY QUINN VOL. 4: SURPRISE, SURPRISE. Collects lead stories from #22-27 and the full HARLEY QUINN 25th ANNIVERSARY SPECIAL #1, where the industry's top talents--including her co-creator, Paul Dini--salute the one and only Harley!

"It's silly, it's funny, it's irreverent."--Comic Book Resources

"Every bit as chaotic and unabashedly fun as one would expect."--IGN

"Harley Quinn is a pure joy as a self-referential comedic anti-villain, and an antidote to the far too serious superhero operas that it shares its universe with."--Newsarama

Amanda Conner started out in comics after working as an illustrator for New York ad agencies. However, loving comic books and cartooning the most, Amanda found work at Archie, Marvel and Claypool Comics early in her career. She's probably best known for her work on VAMPIRELLA for Harris Comics, as well as PAINKILLER JANE, CODENAME KNOCKOUT, BIRDS OF PREY and the creator-owned books GATECRASHER and THE PRO (with Jimmy Palmiotti and Garth Ennis).

Jimmy Palmiotti is a multi-award-winning comic book creator with a wide range of experience in advertising, production, editorial, film writing and production, media presentation and video game development. He has created and co-created numerous series and characters, including THE NEW WEST, THE MONOLITH, 21 DOWN, THE RESISTANCE, GATECRASHER, BEAUTIFUL KILLER, BACK TO BROOKLYN, THE TATTERED MAN and PAINKILLER JANE. He has co-written DC's ALL-STAR WESTERN and BATWING with Justin Gray, as well as HARLEY QUINN and STARFIRE with Amanda Conner.

GOR010666490
Harley Quinn Volume 4: Rebirth by Jimmy Palmiotti
Jimmy Palmiotti
Used - Like New
Paperback
DC Comics
2018-01-16
144
1401275265
9781401275266
N/A
Book picture is for illustrative purposes only, actual binding, cover or edition may vary.
The book has been read, but looks new. The book cover has no visible wear, and the dust jacket is included if applicable. No missing or damaged pages, no tears, possible very minimal creasing, no underlining or highlighting of text, and no writing in the margins.