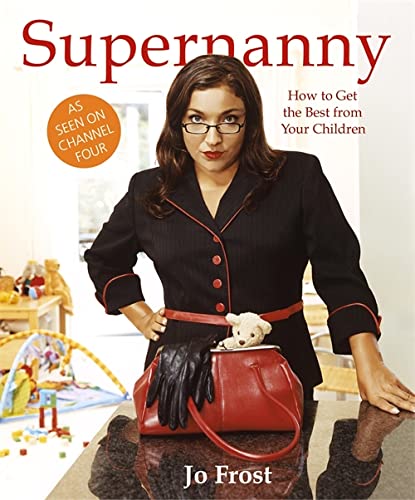 Used Price
$8.69
Free Shipping in the US
Tougher than a sergeant major, stricter than a school headmistress ... it's SUPERNANNY! The Sunday Times bestseller is now in paperback - 6.5 million viewers and 50,000 book buyers can't be wrong!
Reviews:
Trustpilot
Very Good

Jo Frost, a.k.a SUPERNANNY, is the answer to every stressed parent's dreams. In Channel 4's prime time series Jo works miracles on unruly children, by dispensing tough love, no-nonsense rules and reassuring us that parents do know best. The SUPERNANNY method gives parents the know-how to tackle any problem area, be it mealtime, bathtime, bedtime, bedwetting, homework, sibling rivalry, aggressive behaviour or a child who just won't do what he or she is told. In an era where parents are bombarded with conflicting or guilt-laden messages at every turn, and sometimes obey their kids' commands rather than the other way around, this is an upbeat, back-to-basics approach to restoring harmony and authority in the home.

Jo has a magical way with children, but her methods are simple and can and do work for anyone: regular routine, consistency, verbal warnings, time out after misbehaviour, and rewarding good behaviour with lots of attention. And of course there's Jo's hallmark - the famous naughty step. So whether your ten-month-old won't sleep through the night, or your two-year-old is out of control, Jo knows what to do and can show you how to do it. For anyone who doesn't feel in charge at home, this is a godsend of a book full of brilliantly commonsense advice - the only parenting book you'll ever want.

Jo Frost has had over fifteen years experience as a nanny to children from newborns to teens, on both sides of the Atlantic. She was watched by over six million viewers on Channel 4's Supernanny.

GOR001285344
Supernanny by Jo Frost
Jo Frost
Used - Very Good
Paperback
Hodder & Stoughton General Division
2006-03-27
224
0340897767
9780340897768
N/A
Book picture is for illustrative purposes only, actual binding, cover or edition may vary.
This is a used book - there is no escaping the fact it has been read by someone else and it will show signs of wear and previous use. Overall we expect it to be in very good condition, but if you are not entirely satisfied please get in touch with us.