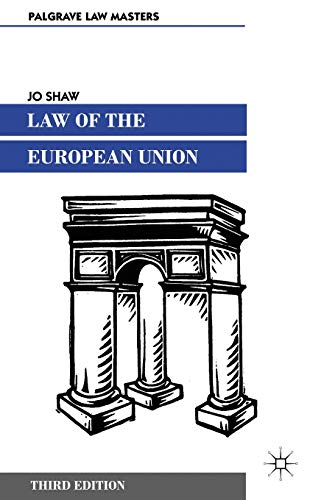 Law of the European Union
by Jo Shaw

Law of the European Union Summary

Law of the European Union by Jo Shaw

A new and fully updated edition of Jo Shaw's popular textbook, Law of the European Union provides an account of the constitutional principles and legal institutions of the European Union. Written in an easy-to-understand and engaging style, the book assumes no prior knowledge. It places EU law in its context, examining its relationship with the national legal systems and national constitutions, as well as the role of the EU within a wider global order.

This much anticipated new edition is completely up-to-date after the coming into force of the Treaty of Amsterdam and fully updated in all areas of coverage. It covers the 2000 Intergovernmental Conference, the Convention drafting a Fundamental Rights Charter for the EU, the resignation of the Commission in March 1999 and the programme for reforming the Commission. Two new chapters deal with values and principles in the EU constitutional framework, and at the end of most chapters can be found lists of relevant websites for further reading.

Law of the European Union Reviews

This is...one of the best books of its kind on the market. It is student friendly in the best sense of the term. While in no way patronising or talking-down to its readers, it steers them thoroughly and in a helpfully structured way through the subject and anticipates the difficulties often encountered by those studying it for the first time. The achievement of these objectives is assisted by placing the law in its wider historical, political and economic contexts. Problems and complexities are treated clearly and firmly. The book systematically encourages student-centred learning by posing questions and review problems and providing suggestions for further reading and lists of key websites as well as a full general bibliography.' - Professor John Bridge, Journal of European Information Association

Preface.- Table of cases.- Table of articles.- List of abbreviations.- Table of equivalences.- PART I: INTRODUCING THE EUROPEAN UNION.- Studying the Law of the European Union.- Evolving From Community to Union.- The Unfinished Union: The Treaty of Maastricht and beyond.- PART II:THE INSTITUTIONAL AND CONSTITUTIONAL FRAMEWORK OF THE EUROPEAN UNION.- The Institutions of the European Union.- The Evolving EU Constitutional Framework.- PART III: THE EUROPEAN UNION AND ITS INSTITUTIONS AT WORK.- The legal and constitutional dimensions of policy-making in the European Union.- Legislative, administrative and budgetary procedures.- The Implementation and Enforcement of EU law.- PART IV: VALUES AND PRINCIPLES IN THE EUROPEAN UNION CONSTITUTIONAL FRAMEWORK.- Fundamental Rights and General Principles of Law.- Citizenship and the European Union.- PART V: THE EU LEGAL ORDER AND THE NATIONAL LEGAL ORDERS.- Article 234 EC The Organic Connection Between National Courts and the Court of Justice.- EU Law and the Legal Systems of the Member States.- The National Dimension: Domestic Remedies for Breach of EC Law and National Reactions to the Challenge.- PART VI: THE JUDICIAL CONTROL OF THE EU INSTITUTIONS.- Introduction to the Judicial Control of the EU Institutions.- Judicial Review of the Acts of the Institutions.- Judicial Control of Failure to Act.- Non-Contractual Liability and Compensation for Loss Caused by the EU.- Bibliography.- Index.

GOR003668197
Law of the European Union by Jo Shaw
Jo Shaw
Palgrave Law Masters
Used - Very Good
Paperback
Palgrave Macmillan
2000-09-29
591
0333924916
9780333924914
N/A
Book picture is for illustrative purposes only, actual binding, cover or edition may vary.
This is a used book - there is no escaping the fact it has been read by someone else and it will show signs of wear and previous use. Overall we expect it to be in very good condition, but if you are not entirely satisfied please get in touch with us.