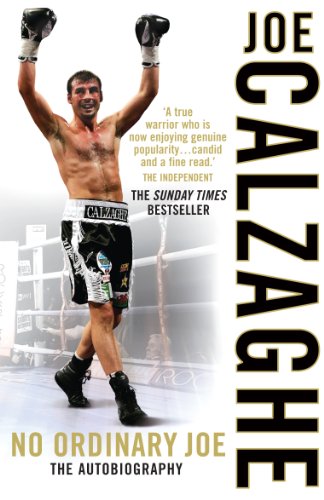 No Ordinary Joe
by Joe Calzaghe

In Stock
$6.69
This is the story of Calzaghe's extraordinary life, from his humble beginnings in his hometown of Newbridge, to his ascent to personal greatness, becoming the first super middleweight boxer to win the prized belt awarded by The Ring, the bible of boxing, in the division's near 20-year history.
Like New Very Good
Only 1 left

No Ordinary Joe by Joe Calzaghe

IT WAS past three o'clock in the morning when Joe Calzaghe experienced the sweetest validation of his professional life. Victory over Jeff Lacy, a 28-year-old American compared to a young Mike Tyson because of his power and "take-no-prisoners attitude", left no one in doubt about the world super middleweight champion's talent. For years, Calzaghe's virtuosity remained a legend of the Welsh valleys. His defeat in 1997 of Chris Eubank brought him to prominence, winning for him the World Boxing Organisation (WBO) super middleweight title. But despite a record number of defences of the belt, his career lacked a defining contest. A long line of challengers and ex-titleholders were disposed of but the biggest names in American boxing avoided the ultimate showdown he craved. Hand injuries further obscured the true level of his aptitude for an art he began to learn from his father, Enzo, at the age of eight when - inspired by Sugar Ray Leonard - a rolled-up carpet in the family home in Newbridge became a makeshift heavy bag. This is the story of Calzaghe's extraordinary life, from his humble beginnings in his hometown of Newbridge, to his ascent to personal greatness, becoming the first super middleweight boxer to win the prized belt awarded by The Ring, the bible of boxing, in the division's near 20-year history. One of Britain's foremost sporting champions, a warrior and working-class hero, this is the story of the triumphs and trials that made Calzaghe a legend.

"Now this is what sport's all about ... His battles personal, and in the ring, make for fine fight game reading" * Daily Sport *
"The portrayal in this autobiography of Calzaghe as a true warrior who is now enjoying genuine popularity is justified ... candid [and] a fine read. Go on, Joe!" * The Independent *
"A knockout read" * The Wharf *
"A frank, honest and truly inspirational autobiography ... No Ordinary Joe is a must-read for all sports fans" * North West Evening Mail *
"Fittingly gritty" * Telegraph *

JOE CALZAGHE, winner of three consecutive ABA titles as an amateur (a post-war record) and the dominant super middleweight in the world for the past decade, was born in 1972 in Hammersmith, London, growing up from the age of two in Newbridge, Wales. After successfully challenging Chris Eubank for the WBO title, he has remained a super middleweight world champion for more than a decade. He has two sons, Joe and Connor, and lives in Blackwood.

GOR010477951
No Ordinary Joe by Joe Calzaghe
Joe Calzaghe
Used - Like New
Paperback
Cornerstone
2008-06-05
336
0099509350
9780099509356
Short-listed for British Sports Book Awards: Autobiography 2008
Book picture is for illustrative purposes only, actual binding, cover or edition may vary.
This is a used book - there is no escaping the fact it has been read by someone else and it will show signs of wear and previous use. Overall we expect it to be in very good condition, but if you are not entirely satisfied please get in touch with us.