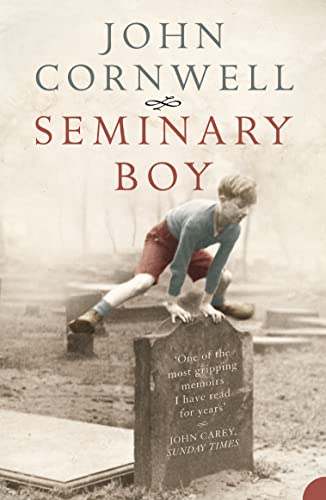 One of the most extraordinary memoirs of recent years, the acclaimed writer John Cornwell has finally written his own story, and the story of a choice he had to make between the Church and a life lived outside its confines.

One of the most extraordinary memoirs of recent years, the acclaimed writer John Cornwell has finally written his own story, and the story of a choice he had to make between the Church and a life lived outside its confines.

John Cornwell decided to become a priest at the age of thirteen, a strange choice perhaps for a boy who'd been sent to a 'convalescent home' for having whacked a nun about the head. Growing up in a chaotic household, sharing two rooms with his brothers and sisters, his hot-headed mother and - when he was around - absconding father, John spent his time roaming the war-torn streets of London looking for trouble. One day, at his mother's suggestion, he responded to a call from his local parish priest for altar servers. The 'dance of the rituals', the murmur of Latin and the candlelit dawn took hold of his imagination and provided him with a new and unexpected comfort.

He left post-war London for Cotton, a seminary in the West Midlands. In this hidden, all-male world, with its rhythms of devotion and prayer, John grew up caught between his religious feelings and the rough and tumble of his life back in London; between seeking the face of God in the wild countryside around him and experiencing his first kiss; between monitoring his soul and watching a girl from a moving train whose face he will never forget.

Cornwell tells us of a world now vanished: of the colourful community of priests in charge; of the boys and their intense and sometimes passionate friendships; of the hovering threat of abuse in this cloistered environment. And he tells us of his struggle to come to terms with a shameful secret from his London childhood - a vicious sexual attack which haunts his time at Cotton.

A book of tremendous warmth and humour, `Seminary Boy' is about an adolescent's search for a father and for a home.

`"Seminary Boy" is a complex story written with beautiful and brutal exactness...an intensely involving, carefully paced book by one of the most thoughtful and well-informed of Catholic writers. A story about the loss of faith and its eventual return, it has the hold of good fiction and the grip of sober truth.' Guardian

`What makes it so gripping (and it is one of the most gripping memoirs I have read for years) is its incisive style.' Sunday Times

`Apart from its beautiful writing, what stamps "Seminary Boy" as a classic story of growing up is the kaleidoscope of perspectives it offers on the mystery of being...Layer after layer of art and truth compete for your attention, and the ambiguities are intrinsic to the power of the writing.' Spectator

John Cornwell is an award-winning journalist and author. `Hitler's Pope' was an international bestseller, and he won the non-fiction Gold Dagger Award for `Earth to Earth', the story of a West Country family tragedy. His story of the Louisville Prozac trial, `Power To Harm', received international acclaim, and his recent history, `Hitler's Scientists: Science, War and the Devil`s Pact', won the Science and Medical Network book of the year prize for 2005. Cornwell is a Fellow Commoner of Jesus College, Cambridge, and a Fellow of the Royal Society of Literature.

GOR001238825
Seminary Boy by John Cornwell
John Cornwell
Used - Very Good
Paperback
HarperCollins Publishers
2007-04-02
304
0007244320
9780007244324
Short-listed for PEN/Ackerley Prize 2007
Book picture is for illustrative purposes only, actual binding, cover or edition may vary.
This is a used book - there is no escaping the fact it has been read by someone else and it will show signs of wear and previous use. Overall we expect it to be in very good condition, but if you are not entirely satisfied please get in touch with us.