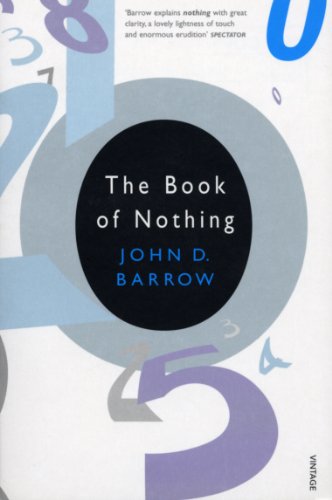 The Book Of Nothing
by John D. Barrow

In Stock
$7.19
This remarkable book ranges over every nook and cranny of nothingness to reveal how the human mind has had to make something of nothing in every field of human enquiry.
Very Good
5 in stock

The Book Of Nothing Summary

The Book Of Nothing by John D. Barrow

How do you begin to understand the concept of nothing? Where does it begin and where does it end? From the zeros of the mathematician to the void of the philosophers, from Shakespeare to the empty set, from the ether to the quantum vacuum, from being and nothingness to creatio ex nihilo, there is much ado about nothing at the heart of things. Recent exciting discoveries in astronomy are shown to shed new light on the nature of the vacuum and its dramatic effect upon the explanation of the Universe. This remarkable book ranges over every nook and cranny of nothingness to reveal how the human mind has had to make something of nothing in every field of human enquiry.

The Book Of Nothing Reviews

"The startling story of the West's intellectual struggle with the concept of zero is told with admirable elegance and clarity" * New Statesman *
"When it comes to explaining the trickiest ideas John Barrow goes the extra mile which helps you to understand when going on" * Guardian *
"An entertaining and informative account of how the zero came into being in ancient civilisations such as the Babylonian and Egyptian...I am happy to report that nothing is full of interesting reading" * New Scientist *

John D. Barrow is Professor of Mathematical Sciences and Director of the Millennium Mathematics Project at Cambridge University, Fellow of Clare Hall, Cambridge, a Fellow of the Royal Society, and the current Gresham Professor of Geometry at Gresham College, London. His principal area of scientific research is cosmology, and he is the author of many highly acclaimed books about the nature and significance of modern developments in physics, astronomy, and mathematics, including The Origin of the Universe, The Universe that Discovered Itself; The Book of Nothing, The Constants of Nature, The Infinite Book: a Short Guide to the Boundless, Timeless and Endless, The Artful Universe Expanded, New Theories of Everything, and Cosmic Imagery.

GOR001230327
The Book Of Nothing by John D. Barrow
John D. Barrow
Used - Very Good
Paperback
Vintage Publishing
2001-07-05
400
0099288451
9780099288459
N/A
Book picture is for illustrative purposes only, actual binding, cover or edition may vary.
This is a used book - there is no escaping the fact it has been read by someone else and it will show signs of wear and previous use. Overall we expect it to be in very good condition, but if you are not entirely satisfied please get in touch with us.