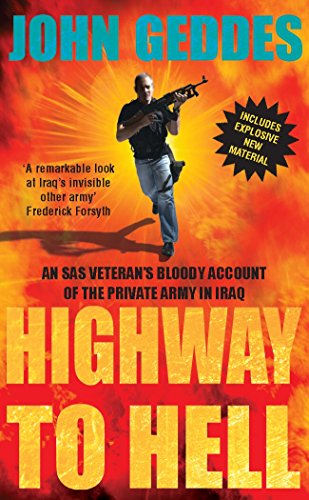 Highway to Hell
by John Geddes

In Stock
$9.19
but there's another western army in Iraq that dwarfs the British contingent and is second only in size to the US Army itself. Now, for the first time, John Geddes will reveal the inside story of this extraordinary private army and the private war they are still fighting with the insurgents in Iraq.
Very Good
Only 3 left

Highway to Hell by John Geddes

"Anyone entering Iraq must travel the road from Amman to Baghdad along the Fallujah by-pass and around the Ramadi Ring Road. It's the most dangerous trunk route in the world used as a personal, fairground shooting gallery by insurgents and Islamists with rocket propelled grenades and Kalashnikovs. For newcomers to the country it's terrifying -- but hell only really begins when that first journey ends..." Present-day Iraq: a crucible of torture, chemical warfare and Islamic terrorism, and straddling over it all the mighty US Army and its allies; but there's another western army in Iraq that dwarfs the British contingent and is second only in size to the US Army itself. It's a disparate and anarchic multi-national force of men gathered from twenty or more countries numbering some 30,000. It's a mercenary army of men and a few women with guns for hire earning an average of $1,000 dollars a day. They are in Iraq to provide security for the businessmen, surveyors, building contractors, oil experts, aid workers and, of course, the TV crews who have flocked to the country to pick over the carcass of Saddam's regime and help the country re-build. Not since the days when the East India Company used soldiers of fortune to depose fabulously wealthy Maharajas and conquer India for Great Britain, and mercenaries fought George Washington's Continental Army for King George, has such a large and lethal independent fighting force been assembled. Once upon a time such men were called freelances, mercenaries, soldiers of fortune or dogs of war, but today they go under a different name: private military contractors. There's a far more fundamental sea change, too, as women have joined their ranks in significant numbers for the first time, bringing a new and interesting dynamic into the equation. In Iraq today the majority of their number are men who come from 'real deal' Special Forces units or former soldiers from regular units and regiments; all of them know what they're about and rub shoulders together more or less comfortably with at least a shared understanding of basic military requirements. One such man is John Geddes, ex-SAS warrant officer and veteran of a fistful of hard wars who became a member of the private army in Iraq for the eighteen months immediately following George W. Bush's declaration of the end of hostilities in early May 2003. Now, for the first time, John Geddes will reveal the inside story of this extraordinary private army and the private war they are still fighting with the insurgents in Iraq.

"A remarkable look at Iraq's invisible army... without whom no Western civilian could stay alive for more than a few hours" * Frederick Forsyth *
"Moves at a good lick" * The Spectator *
"An eye opening book" * Daily Mail *
"A gripping and honest story which provides an unusual take on the war memoir" * The Good Book Guide *
"One seriously hard dude" * Amazon.co.uk *

John Geddes fought in the Falklands War with the Parachute Regiment and saw action in the ferocious Battle of Goose Green. He was then selected for the SAS where he served in Air Troop with distinction. He is a veteran of covert operations worldwide including the Balkans, Northern Ireland and Africa. His last tour in the SAS was in South America where he conducted devastating, lethal undercover operations against cocaine cartels. Since leaving the SAS as a Warrant Officer he has been involved in security work in the Congo, Nigeria, Eastern Europe and the Middle East. He now runs a company training personnel mainly for security work in Iraq and Afghanistan.

GOR001239385
Highway to Hell by John Geddes
John Geddes
Used - Very Good
Paperback
Cornerstone
2007-05-03
368
0099499460
9780099499466
N/A
Book picture is for illustrative purposes only, actual binding, cover or edition may vary.
This is a used book - there is no escaping the fact it has been read by someone else and it will show signs of wear and previous use. Overall we expect it to be in very good condition, but if you are not entirely satisfied please get in touch with us.