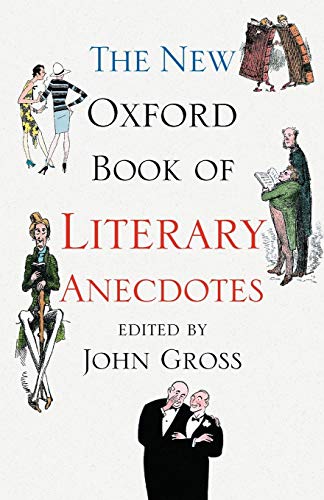 The New Oxford Book of Literary Anecdotes
by John Gross

Used Price
$14.99
Free Shipping in the US
An unrivalled collection of literary gossip and intimate sidelights on the lives of the authors. This hugely entertaining anthology ranges from Chaucer to the present day, with anecdotes that are hilarious, touching, outrageous, sinister, inspiring, and downright weird.
Reviews:
Trustpilot
Like New Very Good Good

The New Oxford Book of Literary Anecdotes by John Gross

An unrivalled collection of literary gossip and intimate sidelights on the lives of the authors. The dictionary defines an anecdote as 'a short account of an entertaining or interesting incident', and the anecdotes in this collection more than live up to that description. Many of them are funny, often explosively so. Others are touching, outrageous, sinister, inspiring, or downright weird. They show writers in the English-speaking world from Chaucer to the present acting both unpredictably, and deeply in character. The range is wide - this is a book which finds room for Milton and Margaret Atwood, George Eliot and P. G. Wodehouse, Chinua Achebe and Ian Fleming, Brendan Behan and Wittgenstein. It is also a book in which you can find out which great historian's face was once mistaken for a baby's bottom, which film star left a haunting account of Virginia Woolf not long before her death, and what Agatha Christie really thought of Hercule Poirot - a book not just for lovers of literature, but for anyone with a taste for the curiosities of human nature.

GOR010439541
The New Oxford Book of Literary Anecdotes by John Gross
John Gross
Oxford Books of Prose & Verse
Used - Like New
Paperback
Oxford University Press
2008-09-25
400
0199543410
9780199543410
N/A
Book picture is for illustrative purposes only, actual binding, cover or edition may vary.
This is a used book - there is no escaping the fact it has been read by someone else and it will show signs of wear and previous use. Overall we expect it to be in very good condition, but if you are not entirely satisfied please get in touch with us.