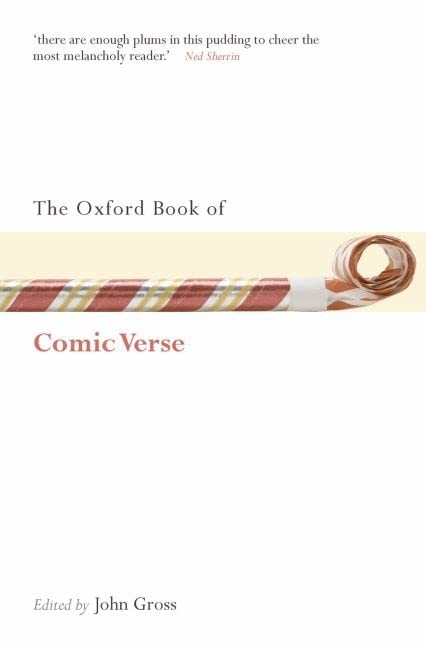 The Oxford Book of Comic Verse
by John Gross

Used Price
$9.99
Free Shipping in the US
A wide-ranging anthology of comic verse including epigrams, street ballads, clerihews, limericks, advertising jingles, as well as the classic writers of comic verse, from Chaucer to Ogden Nash and beyond.
Reviews:
Trustpilot
Very Good Good

The Oxford Book of Comic Verse by John Gross

From Chaucer to Vikram Seth and Victoria Wood; from Byron to John Updike; from Augustan satire to advertising jingles; from G. K. Chesterton to Wendy Cope - this superb anthology is notable above all for its breadth. It is truly international in scope, bringing together poets from far beyond the British Isles. Drawing on many different types of verse, from epigrams to street ballads, from clerihew to music-hall lyrics, from the double-dactyl of the calypso, it offers an exceptionally wide range of comic pleasures. The poems in this collection are by turns subtle, down-to-earth, macabre, ingenious, acerbic, ribald, and cheerful; written to amuse, they call forth laughter and delight in equal measure. The established classics of comic verse, writers such as Tom Hood, W. S. Gilbert, and Ogden Nash, are represented in force, but many unfamiliar or unexpected names are also included. This collection undoubtedly contains matter of great historical interest, but the emphasis throughout is firmly on enjoyment.

Review from previous edition the laughter quotient is greatly boosted by many unfamiliar delights * Times Literary Supplement *
Mr Gross has put enough plums in his pudding to cheer the most melancholy reader. * Ned Sherrin, Evening Standard *
John Gross has rightly relied on instinct, selected widely, and spared us too much agonising about what constitutes comic verse. * Literary Review *
hugely enjoyable * London Evening Standard *
Almost every quotation in this new Oxford collection amused me ... This is a good anthology. * F.E. Pardoe, Birmingham Post *
it is hard to voice any complaint whatever about an anthology so replete with riches - one, moreover, upholding the idea of humour as a by-product of an idiosyncratic vision, with ease-of-manner resulting from a cast-iron control ... True comic verse, as we find here, is always inseparable from comic verve. * Gerald Jacobs, The Spectator *

GOR003450721
The Oxford Book of Comic Verse by John Gross
John Gross
Oxford Books of Prose & Verse
Used - Very Good
Paperback
Oxford University Press
2009-03-26
548
0199561613
9780199561612
N/A
Book picture is for illustrative purposes only, actual binding, cover or edition may vary.
This is a used book - there is no escaping the fact it has been read by someone else and it will show signs of wear and previous use. Overall we expect it to be in very good condition, but if you are not entirely satisfied please get in touch with us.