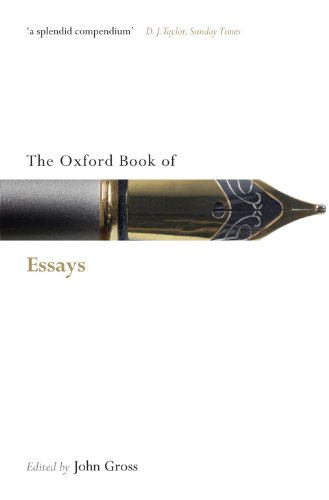 The Oxford Book of Essays
by John Gross

Used Price
$9,99
Free Shipping in the US
The essay is one of the richest, most imaginative, and most eloquent literary form. This anthology contains some 140 essays by all the leading exponents of the genre.
Reviews:
Trustpilot
Very Good

The Oxford Book of Essays Summary

The Oxford Book of Essays by John Gross

The essay is one of the richest of literary forms. Its most obvious characteristics are freedom, informality, and the personal touch - though it can also find room for poetry, satire, fantasy, and sustained argument. All these qualities, and many others, are on display in The Oxford Book of Essays. The most wide-ranging collection of its kind to appear for many years, it includes 140 essays by 120 writers: classics, curiosities, meditations, diversions, old favourites, recent examples that deserve to be better known. A particularly welcome feature is the amount of space allotted to American essayists, from Benjamin Franklin to John Updike and beyond. This is an anthology that opens with wise words about the nature of truth, and closes with a consideration of the novels of Judith Krantz. Some of the other topics discussed in its pages are anger, pleasure, Gandhi, Beau Brummell, wasps, party-going, gangsters, plumbers, Beethoven, potato crisps, the importance of being the right size, and the demolition of Westminster Abbey. It contains some of the most eloquent writing in English, and some of the most entertaining.

The Oxford Book of Essays Reviews

A vast, wonderful company. * Michael Foot,The Observer, *
From the thousands of essays and pieces available nobody would choose the same...but I doubt if anyone would have chosen better * Frank Kermode,Independent on Sunday *
The selection has nothing in it that is not of the top class...John Gross has the shrewdest possible eye for what practitioners in the genre can do best with a sense of form and culture, of humour and balance...Every essay here is a pleasure to read. * John Bayley, Times Literary Supplement *
John Gross's achievement is to see the essay as an essentially modern medium which addresses us as directly and potently as the newspaper. * Barbara Everett, The Independent *

John Gross is the author of The Rise and Fall of the Man of Letters (1973) and editor of The Oxford Book of Aphorisms (1983) and The Oxford Book of Literary Anecdotes (2006), among other publications. He was editor of the Times Literary Supplement from 1974 to 1981, and is currently theatre critic of the Sunday Telegraph.

CIN000348671
The Oxford Book of Essays by John Gross
John Gross
Oxford Books of Prose & Verse
Used - Very Good
Paperback
Oxford University Press
2008-10-23
704
0199556555
9780199556557
N/A
Book picture is for illustrative purposes only, actual binding, cover or edition may vary.
This is a used book - there is no escaping the fact it has been read by someone else and it will show signs of wear and previous use. Overall we expect it to be in very good condition, but if you are not entirely satisfied please get in touch with us.