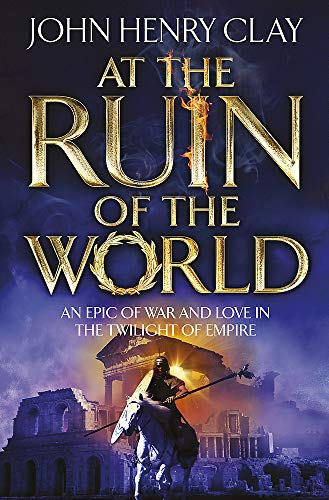 At the Ruin of the World
by John Henry Clay

Used Price
$9.19
Free Shipping in the US
An epic novel of the fall of the Roman Empire, seen through the eyes of four very different characters.
Reviews:
Trustpilot
Very Good

At the Ruin of the World Summary

At the Ruin of the World by John Henry Clay

The Emperor is weak. Countless Romans live under the rule of barbarian kings. Politicians scheme and ambitious generals vie for power.

Then from the depths of Germany arises an even darker threat: Attila, King of the Huns, gathering his hordes and determined to crush Rome once and for all.

In a time of danger and deception, where every smile conceals betrayal and every sleeve a dagger, three young people hold onto the dream that Rome can be made great once more. But as their fates collide, they find themselves forced to survive in a world more deadly than any of them could ever have imagined.

What can they possibly do to save the Empire, or themselves, from destruction?

Customer Reviews - At the Ruin of the World

At the Ruin of the World Reviews

THE LION AND THE LAMB was one of my very favourite novels of last year and John Henry Clay has done it again with AT THE RUIN OF THE WORLD (incidentally, what a great title). Firmly routed in history, this is a compelling and addictive account of the demise of Rome's western empire, focusing in particular on one family that was influential in both the fields of battle and politics. * For Winter Nights *

Dr John Henry Clay is a Lecturer in History at the University of Durham, from where he has built up an international academic and research reputation in Anglo-Saxon and Frankish history and archaeology, particularly concerning themes of conversion and religious identity, landscape perception and the transition from the late-Roman to the early-medieval period both in Britain and on the Continent. He completed his PhD at the University of York in 2008 and spent time as a visiting researcher at the Institute for Medieval Research of the Austrian Academy of Sciences in Vienna, before taking up his post in Durham in 2010.

His first novel was THE LION AND THE LAMB.

GOR007168363
At the Ruin of the World by John Henry Clay
John Henry Clay
Used - Very Good
Paperback
Hodder & Stoughton General Division
2016-01-07
480
1444761382
9781444761382
N/A
Book picture is for illustrative purposes only, actual binding, cover or edition may vary.
This is a used book - there is no escaping the fact it has been read by someone else and it will show signs of wear and previous use. Overall we expect it to be in very good condition, but if you are not entirely satisfied please get in touch with us.