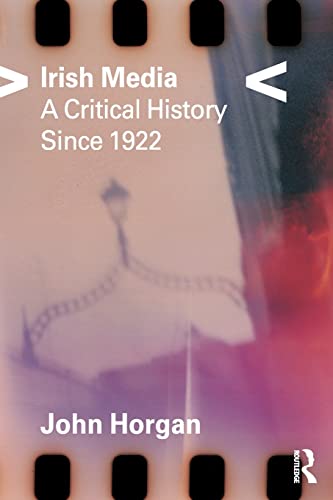 Used Price
$20.99
Free Shipping in the US
Covering all principal media forms, print and electronic, on both sides of the border, Horgan shows how Irish history and politics have shaped the media of Ireland and, in turn, been shaped by them.
Reviews:
Trustpilot
Like New Very Good

Irish Media: A Critical History since 1922 by John Horgan

Irish Media: A Critical History maps the landscape of media in Ireland from the foundation of the modern state in 1922 to the present. Covering all principal media forms, print and electronic, in the Republic and in Northern Ireland, John Horgan shows how Irish history and politics have shaped the media of Ireland and, in turn, have been shaped by them.
Beginning in a country ravaged by civil war, it traces the complexities of wartime censorship and details the history of media technology, from the development of radio to the inauguration of television in the 1950s and 1960s. It covers the birth, development and - sometimes - the death of major Irish media during this period, examining the reasons for failure and success, and government attempts to regulate and respond to change. Finally, it addresses questions of media globalisation, ownership and control, and looks at issues of key significance for the future.
Horgan demonstrates why, in a country whose political divisions and economic development have given it a place on the world stage out of all proportion to its size, the media have been and remain key players in Irish history.

'It raises many valid questions ... The book will be a very useful textbook in universities' - Independent Newspapers

'Well-written, well-researched and timely ... this book will become the standard work for some years, not just as a work of reference, but also as an agenda for researchers and students.' - Michael Foley, Dublin Institute of Technology, Ireland

'Provides an absorbing, well researched, well-written and well-paced overview of how Irish media has evolved (and devolved) since independence.' - Sunday Tribune

'This book must be the starting point for anyone wishing to investigate the subject.' - Media Report

John Horgan is Professor of Journalism at Dublin City University, and the author of a number of acclaimed political biographies, notably Sean Lemass (1997) and Noel Browne (2000).

GOR010336486
Irish Media: A Critical History since 1922 by John Horgan
John Horgan
Used - Like New
Paperback
Taylor & Francis Ltd
2001-03-15
228
0415216419
9780415216418
N/A
Book picture is for illustrative purposes only, actual binding, cover or edition may vary.
The book has been read, but looks new. The book cover has no visible wear, and the dust jacket is included if applicable. No missing or damaged pages, no tears, possible very minimal creasing, no underlining or highlighting of text, and no writing in the margins.