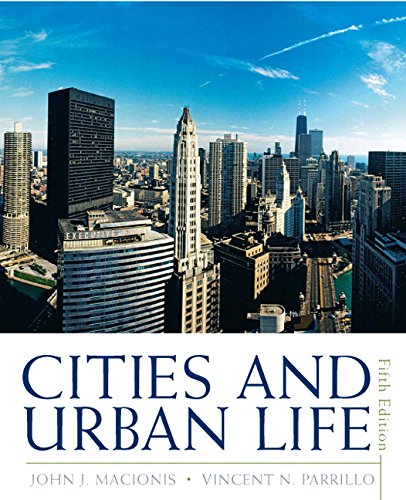 Cities and Urban Life, authored by two of the best-known textbook writers in the field, provides a comprehensive introduction to urban sociology, urban anthropology, and urban studies courses. Primarily sociological in approach, this book incorporates historical, social, psychological, geographical, and anthropological insights. While strong in the classical urban sociology, it also gives extensive attention to the "new" political economy approach to urban studies. Also, the authors use global cities as case studies for more relevance to students.

John J. Macionis was born and raised in Philadelphia, Pennsylvania. He earned a bachelor's degree from Cornell University and a doctorate in sociology from the University of Pennsylvania.

John Macionis is Professor and Distinguished Scholar of Sociology at Kenyon College in Gambier, Ohio, where he has taught for almost thirty years. During that time, he has chaired the Sociology Department, directed the college's multidisciplinary program in humane studies, presided over the campus senate and the college's faculty, and taught sociology to thousands of students.

In 2002, the American Sociological Association presented Macionis with the Award for Distinguished Contributions to Teaching, citing his innovative use of global material as well as the introduction of new teaching technology in his textbooks.

Professor Macionis has been active in academic programs in other countries, having traveled to some fifty nations. He writes, "I am an ambitious traveler, eager to learn and, through the texts, to share much of what I discover with students, many of whom know little about the rest of the world. For me, traveling and writing are all dimensions of teaching. First, and foremost, I am a teacher-a passion for teaching animates everything I do."

At Kenyon, Macionis teaches a number of courses, but his favorite class is Introduction to Sociology, which he offers every semester. He enjoys extensive contact with students and invites everyone enrolled in each of his classes to enjoy a home-cooked meal.

The Macionis family-John, Amy, and children McLean and Whitney-live on a farm in rural Ohio. In his free time, Macionis enjoys tennis, swimming, hiking, and playing oldies rock-and-roll (he recently released his first CD). Macionis is as an environmental activist in the Lake George region of New York's Adirondack Mountains, working with a number of organizations, including the Lake George Land Conservancy, where he serves as president of the board of trustees.

Vincent N. Parrillo was born and raised in Paterson, New Jersey. He received his B.S. degree from Seton Hall University, his M.A. from Montclair State University, and his doctorate from Rutgers University.

He is the executive producer and writer of two award- winning PBS television documentaries: Smokestacks and Steeples: A Portrait of Paterson (1992) and Ellis Island: Gateway to America (1991).

Part I Understanding the City, ITS ORIGIN AND DEVELOPMENT

Chapter 2: The Origins and Development of the World's Cities

Part III The Structure of the City

Chapter 13: Cities in the Developing World

Part I : Understanding the City, ITS ORIGIN AND DEVELOPMENT

Why Study the City?

Urbanization as a Process

Urbanism as a Way of Life

The Complexity of the City: Various Perspectives

The City in History

The Emergence of Urban Sociology

Comparative Urbanism: The City and Culture

The City in Global Perspective

The Quality of City Life

Chapter 2 The Origins and Development of the World's Cities

The Near East: Mesopotamia and Egypt

A Glance Westward: The Americas

The Second Urban Revolution: The Rise of Modern Cities

The Beginnings of Industrialization

Suburbs and the Gilded Age

The Quality of Life in the New Metropolis

The North American City Today: 1950 to the Present

The Coming of the Postindustrial City

The Human Cost of Economic Restructuring

Why Do We Have Sprawl?

A Sense of Community

Urban Decline and the Planners' Response to Sprawl

Karl Marx and Friedrich Engels: From Barbarism to Civilization

Ferdinand Toennies: From Gemeinschaft to Gesellschaft

Georg Simmel: The Mental Life of the Metropolis

Max Weber: The Historical and Comparative Study of Cities

The European Tradition: An Evaluation

Robert Park and Sociology at the University of Chicago

Herbert Gans and the Urban Mosaic

Wirth and Gans: A Comparison

The Classic Theories and Modern Research: Myths and Realities

Tolerance in the City

Impersonality in the City

The Location of Cities

Why Cities Are Where They Are

The Shape of the City

The Los Angeles School and Postmodernism

The General Pattern of Land Use

The Urbanization of Poverty

Kevin Lynch: The Image of the City

The Pedestrian: Watching Your Step

A World of Strangers

Class, Race, and the Urban Experience

The City as Gesellschaft: A Reassessment

Identifying with the City

The City as Gemeinschaft: A Reassessment

The Texture of the City

The City and the Countryside

The City and Civilization

Oswald Spengler: The "Soul" of the City

Lewis Mumford: The City as the Center of Civilization

Daniel J. Monti: The Civic Culture of the City

The City and Societal Culture

Ming Peking and Athens: A Comparison

The Culture of Capitalism and the City

The Emergence of Modern Beijing

The Difficulties of Urban Life

Part III: The Structure of the City

Incomes Within and Outside Cities

Poverty Within and Outside Cities

The Burning and Rebuilding of Chicago

Chicago in the Early Twentieth Century

Housing: A Place to Live

Adequate Housing: Who Has It?

Deterioration and Abandonment in the Inner City

The Inner City Today: A Revival?

Meeting the "No Child Left Behind" Challenge

Effects of Crime on Everyday Life

What Is the Solution?

Chapter 13Cities in the Developing World

The Realities of Urban Planning

The Importance of Values

Creation of a Metropolitan Government

CIN000298750
Cities and Urban Life: United States Edition by John J. Macionis
John J. Macionis
Used - Very Good
Hardback
Pearson Education (US)
2009-05-29
480
020564533X
9780205645336
N/A
Book picture is for illustrative purposes only, actual binding, cover or edition may vary.
This is a used book - there is no escaping the fact it has been read by someone else and it will show signs of wear and previous use. Overall we expect it to be in very good condition, but if you are not entirely satisfied please get in touch with us.