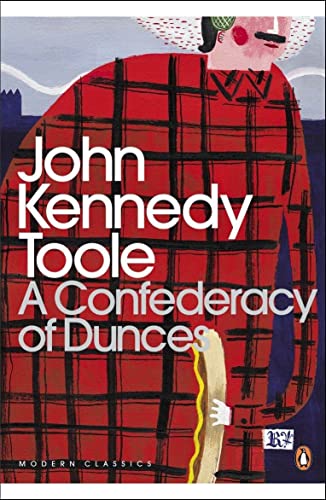 A Confederacy of Dunces
by John Kennedy Toole

In Stock
$10.99
The ordinary folk of New Orleans seem to think he is unhinged as well. Ignatius ignores them as he heaves his vast bulk through the city's fleshpots in a noble crusade against vice, modernity and ignorance. But his momma has a nasty surprise in store for him.
Very Good Good
23 in stock

A Confederacy of Dunces Summary

A Confederacy of Dunces by John Kennedy Toole

'My favourite book of all time... it stays with you long after you have read it - for your whole life, in fact' Billy Connolly

A monument to sloth, rant and contempt, a behemoth of fat, flatulence and furious suspicion of anything modern - this is Ignatius J. Reilly of New Orleans, noble crusader against a world of dunces. The ordinary folk of New Orleans seem to think he is unhinged. Ignatius ignores them, heaving his vast bulk through the city's fleshpots in a noble crusade against vice, modernity and ignorance. But his momma has a nasty surprise in store for him: Ignatius must get a job. Undaunted, he uses his new-found employment to further his mission - and now he has a pirate costume and a hot-dog cart to do it with...

Never published during his lifetime, John Kennedy Toole's hilarious satire, A Confederacy of Dunces is a Don Quixote for the modern age, and this Penguin Modern Classics edition includes a foreword by Walker Percy.

'A pungent work of slapstick, satire and intellectual incongruities ... it is nothing less than a grand comic fugue'
The New York Times

A Confederacy of Dunces Reviews

My favourite book of all time. I've read it so many times and I still go back to it today. -- Billy Connolly

John Kennedy Toole was born in New Orleans in 1937. He received a master's degree in English from Columbia University and taught at Hunter College and at the University of Southwestern Louisiana. He wrote A Confederacy of Dunces in the early sixties and tried unsuccessfully to get the novel published; depressed, at least in part by his failure to place the book, he committed suicide in 1969. It was only through the tenacity of his mother that her son's book was eventually published and found the audience it deserved.

GOR001248750
A Confederacy of Dunces by John Kennedy Toole
John Kennedy Toole
Penguin Modern Classics
Used - Very Good
Paperback
Penguin Books Ltd
2000-03-30
352
0141182865
9780141182865
Winner of Pulitzer Prize for Fiction 1981
Book picture is for illustrative purposes only, actual binding, cover or edition may vary.
This is a used book - there is no escaping the fact it has been read by someone else and it will show signs of wear and previous use. Overall we expect it to be in very good condition, but if you are not entirely satisfied please get in touch with us.