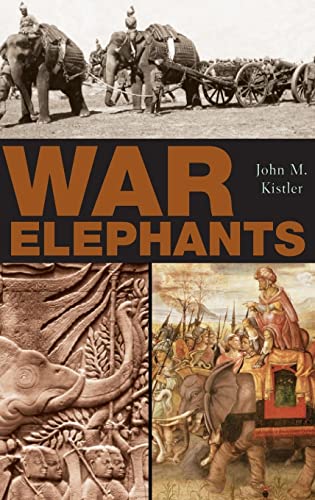 Used Price
$56.99
Free Shipping in the US
This is the story of their largely forgotten role in the history of warfare.

Generals throughout recorded history have used elephants as tanks, bulldozers, and cargo trucks long before such vehicles existed. Elephants have long fought for and served human masters, but it is now the elephants themselves that must be protected.

Elephants have fought in human armies for more than three thousand years. Asian powers boasted of their pachyderm power, while the Romans fielded elephants alongside their legendary legions but were, perhaps, too proud to admit that mere animals contributed to victory. Elephants have gored, stomped, and sliced their way through infantry and cavalry with great success. They have also been cut, speared, bombed, and napalmed for their efforts. This is the story of their largely forgotten role in the history of warfare.

Generals throughout recorded history have used elephants as tanks, bulldozers, and cargo trucks long before such vehicles existed. Until gunpowder began to reduce the utility of elephants in battle during the 17th Century, these beasts built roads, swung swords, or simply terrified opposing forces. Although some believe that elephants were mere gimmicks of warfare, Kistler discredits that notion. His book hopes to give elephants the credit they deserve for the sacrifices they have endured. Elephants have long fought for and served human masters, but it is now the elephants themselves that must be protected.

"War Elephants provides the full history of pachyderms in battle, presenting an animal historian's in-depth history of evidence tracing the use of elephants in battles from 1100 B.C. to the 17th century. From how the elephants participated in battle to strategies against them, War Elephants provides quite a different perspective and is an unique military survey." - The Midwest Book Review - California Bookwatch
"Using his mahout training, John Kistler brings a depth and understanding to the role of elephants in warfare. War Elephants is flawlessly written and researched. While the illustrations are a bit sparse this is not surprising given the subject matter....If you are interested in reading about ancient warfare, or the role of elephants in war, then this book is highly recommended." - Armchair General (Web site)
"War Elephants is the fascinating story of how elephants have fought in human armies for more than three thousand years. From elephants that battled alongside legendary Roman legions, to elephants in modern history who have suffered bombs and napalm for their service, War Elephants examines the pachyderms' role in the equivalent of tanks, bulldozers, cargo haulers and cavalry throughout the millennia. Now after the elephants have made such great sacrifices in warfare, it is the elephants themselves who desperately need protection. A serious-minded work of significant military history scholarship by professional librarian John Kistler, War Elephants is recommended reading for anyone curious about the important role elephants have played in human history." - Midwest Book Review/Wisconsin Bookwatch
"If, as some now apparently believe, the Loch Ness monster has pachydermian antecedents, then John M. Kistler's new book may provide a clue to its origins....[K]istler provides a range of interesting facts about elephant behaviour, not least the actual difficulties of managing a force of war elephants in terms of voracious appetite, enormous thirst, expensive armour and long term commitment to training and care....John Kistler's account is often entertaining and certainly wide ranging." - Times Literary Supplement
"[J]ohn m. Kistler, seeks to give elephants the credit they deserve for the sacrifices they have endured in war zones throughout history. Avid military buffs and students of ancient, medieval, and modern warfare, animal rights, and non-Western warfare will find much of interest in this comprehensive resource." - Library Media Connection
"Generals used elephants as tanks, bulldozers, and cargo trucks long before such vehicles existed, and, until gunpowder reduced the utility of elephants in battle, these beasts built roads, swung swords, and terrified opposing forces. Kistler tells the story of the elephant's largely forgotten role in the history of warfare." - Reference & Research Book News

John M. Kistler is a freelance writer and a professional librarian. He received his mahout certificate from the Elephant Conservation Center in Thailand while assisting consultants on Oliver Stone's film Alexander.

GOR007104186
War Elephants by John M. Kistler
John M. Kistler
Used - Very Good
Hardback
ABC-CLIO
2005-11-30
352
0275987612
9780275987619
N/A
Book picture is for illustrative purposes only, actual binding, cover or edition may vary.
This is a used book - there is no escaping the fact it has been read by someone else and it will show signs of wear and previous use. Overall we expect it to be in very good condition, but if you are not entirely satisfied please get in touch with us.