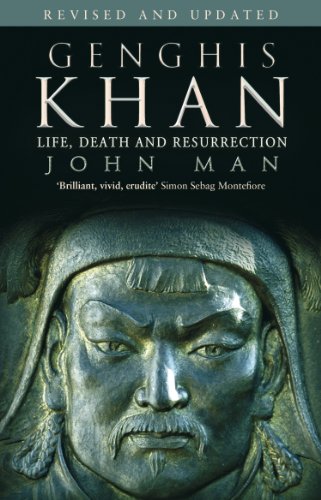 In Stock
$7.99
Genghis Khan - creator of the greatest empire the world has ever seen - is one of history's immortals. John Man's towering achievement in this book, enriched by his experiences in China and Mongolia today, is to bring this little-known story vividly and viscerally to life.
Like New Very Good
21 in stock

Genghis Khan - creator of the greatest empire the world has ever seen - is one of history's immortals. In Central Asia, they still use his name to frighten children. In China, he is honoured as the founder of a dynasty. In Mongolia he is the father of the nation. In the USA, Time magazine, voted Genghis Khan 'the most important person of the last millennium'. But how much do we really know about this man? How is it that an unlettered, unsophisticated warrior-nomad came to have such a profound effect on world politics that his influence can still be felt some 800 years later? How he united the deeply divided Mongol peoples and went on to rule an empire that stretched from China in the east to Poland in the west (one substantially larger than Rome's at its zenith) is an epic tale of martial genius and breathtaking cruelty. John Man's towering achievement in this book, enriched by his experiences in China and Mongolia today, is to bring this little-known story vividly and viscerally to life.

"Absorbing and beautifully written...he [Man] conjures up an ancient people in an alien landscape in such a way as to make them live...a thrilling account" * GUARDIAN *
"First-rate...lively and argued with elan...a fine introduction to the subject, as well as a rattling good read" * INDEPENDENT *
"A fine, well-written and well-researched book" * MAIL ON SUNDAY *
"An eloquent account, not only of a fascinating historical figure and his people, but of the resonance of history itself" * WBQ magazine *
"Enthralling and colourful" * INDEPENDENT ON SUNDAY *

John Man is a historian and traveller with special interests in Mongolia and the history of written communication. His GOBI: TRACKING THE DESERT was the first book on the subject since the 1920s. He is also the author of THE ATLAS OF THE YEAR 1000, a portrait of the world at the turn of the millennium, ALPHA BETA, on the roots of the alphabet, and THE GUTENBERG REVOLUTION, an examination of the origins and impact of printing. His most recent book is GENGHIS KHAN. He lives in London.

GOR001243475
Genghis Khan by John Man
John Man
Used - Very Good
Paperback
Transworld Publishers Ltd
2005-03-01
464
0553814982
9780553814989
N/A
Book picture is for illustrative purposes only, actual binding, cover or edition may vary.
This is a used book - there is no escaping the fact it has been read by someone else and it will show signs of wear and previous use. Overall we expect it to be in very good condition, but if you are not entirely satisfied please get in touch with us.