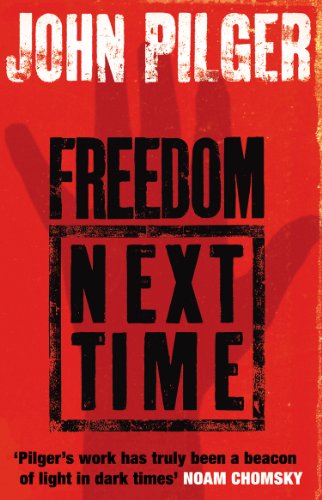 Freedom Next Time
by John Pilger

In Stock
$6.39
In Freedom Next Time he looks at five countries, in each of which a long struggle for freedom has taken place; In Afghanistan, Iraq and South Africa there has been the promise of hope, and even an 'official' freedom, but the reality of these divided societies is that they are still waiting for real freedom.
Very Good
7 in stock

Freedom Next Time by John Pilger

John Pilger is one of the world's pre-eminent investigative journalists and documentary film-makers. His best-selling books of reportage, which include Heroes and Hidden Voices, have in the words of Noam Chomsky 'been a beacon of light in often dark times'. In Freedom Next Time he looks at five countries, in each of which a long struggle for freedom has taken place; in each the people, having shed blood and dreams, are still waiting. In Afghanistan, Iraq and South Africa there has been the promise of hope, and even an 'official' freedom, but the reality of these divided societies is that they are still waiting for real freedom. In Palestine, the cycle of violence continues with no resolution in sight. And the island of Diego Garcia, in the Indian Ocean, is a microcosm of the ruthlessness of great powers. The island was sold by the British to the American military in the 1960s. The indigenous population, descended from slaves, were forcibly removed to the slums of Port Louis in Mauritius. They have continued to fight for the return of their homeland ever since - three years ago the High Court granted them the right of return, but this has subsequently been blocked. The island remains the US's third biggest military base; a base from which they are able to launch attacks against the Middle East. Once again John Pilger gives a voice to the people living through these momentous times and, in gripping detail, shows us the lives behind the headlines.

"Pilger is the closest we have to the great correspondents of the 1930s... The truth in his hands is a weapon, to be picked up and brandished and used in the struggle against evil and injustice" * Guardian *
"John Pilger is the antidote to easy, comfortable thinking, to smugness, to ignorance" * Daily Telegraph *
"Pilger's gift is for finding the image, the instant, that reveals all - he is a photographer using words instead of a camera" -- Salman Rushdie
"John Pilger unearths, with steely attention to facts, the filthy truth and tells it as it is. I salute him" -- Harold Pinter
"The array of interviews with the voiceless and abused provides an indispensable corrective to the litany of disinformation we are fed by the media, and for this achievement Pilger is surely the most outstanding journalist in the world today" * Guardian *

John Pilger grew up in Sydney, Australia. He has been a war correspondent, author and film-maker. He has twice won British journalism's highest award, that of Journalist of the Year, for his work all over the world, notably in Cambodia and Vietnam. He has been International Reporter of the Year and winner of the United Nations Associated Peace Prize and Gold Medal. For his broadcasting, he has won France's Reporter Sans Frontieres, an American television Academy Award, an Emmy, and the Richard Dimbleby Award, given by the British Academy of Film and Television Arts. In 2003, he received the Sophie Prize for 'thirty years of exposing deception and improving human rights'.

GOR001240826
Freedom Next Time by John Pilger
John Pilger
Used - Very Good
Paperback
Transworld Publishers Ltd
2007-06-04
496
0552773328
9780552773324
N/A
Book picture is for illustrative purposes only, actual binding, cover or edition may vary.
This is a used book - there is no escaping the fact it has been read by someone else and it will show signs of wear and previous use. Overall we expect it to be in very good condition, but if you are not entirely satisfied please get in touch with us.