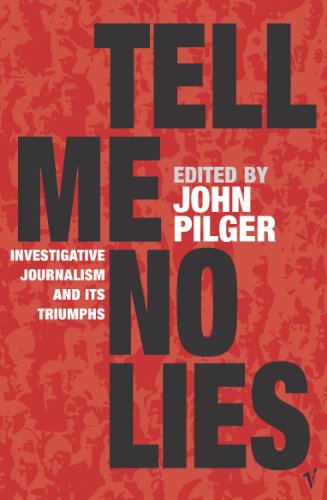 Tell Me No Lies
by John Pilger

In Stock
$11.39
The book - a selection of articles, broadcasts and books extracts that revealed important and disturbing truths - ranges from across many of the critical events, scandals and struggles of the past fifty years. Along the way it bears witness to epic injustices committed against the peoples of Vietnam, Cambodia, East Timor and Palestine.
Very Good Good
12 in stock

Tell Me No Lies Summary

Tell Me No Lies: Investigative Journalism and its Triumphs by John Pilger

Tell Me No Lies is a celebration of the very best investigative journalism, and includes writing by some of the greatest practitioners of the craft: Seymour Hersh on the My Lai massacre; Paul Foot on the Lockerbie cover-up; Wilfred Burchett, the first Westerner to enter Hiroshima following the atomic bombing; Israeli journalist Amira Hass, reporting from the Gaza Strip in the 1990s; Gunter Wallraff, the great German undercover reporter; Jessica Mitford on 'The American Way of Death'; Martha Gelhorn on the liberation of the death camp at Dachau. The book - a selection of articles, broadcasts and books extracts that revealed important and disturbing truths - ranges from across many of the critical events, scandals and struggles of the past fifty years. Along the way it bears witness to epic injustices committed against the peoples of Vietnam, Cambodia, East Timor and Palestine. John Pilger sets each piece of reporting in its context and introduces the collection with a passionate essay arguing that the kind of journalism he celebrates here is being subverted by the very forces that ought to be its enemy. Taken as a whole, the book tells an extraordinary 'secret history' of the modern era. It is also a call to arms to journalists everywhere - before it is too late.

Tell Me No Lies Reviews

"A first-rate selection of investigative articles from some of the world's best reporters" * Guardian *
"One of the most powerful and upsetting books I have read all year" * Ecologist *
"A superb anthology" * Glasgow Herald *
"Genuine objective journalism not only gets the facts right, it gets the meaning of events right. It is compelling not only today, but stands the test of time. It is validated not only by 'reliable sources' but by the unfolding of history. It is journalism that ten, twenty, fifty years after the fact still holds up a true and intelligent mirror to events" -- T.D. Allman

John Pilger grew up in Sydney, Australia. He has been a war correspondent, author and film-maker. He has twice won British journalism's highest award, that of Journalist of the Year, for his work all over the world, notably in Cambodia and Vietnam. He has been International Reporter of the Year and winner of the United Nations Associated Peace Prize and Gold Medal. For his broadcasting, he has won France's Reporter Sans Frontieres, an American television Academy Award, an Emmy, and the Richard Dimbleby Award, given by the British Academy of Film and Television Arts. In 2003, he received the Sophie Prize for 'thirty years of exposing deception and improving human rights'.

GOR001224806
Tell Me No Lies: Investigative Journalism and its Triumphs by John Pilger
John Pilger
Used - Very Good
Paperback
Vintage Publishing
2005-10-06
672
0099437457
9780099437451
N/A
Book picture is for illustrative purposes only, actual binding, cover or edition may vary.
This is a used book - there is no escaping the fact it has been read by someone else and it will show signs of wear and previous use. Overall we expect it to be in very good condition, but if you are not entirely satisfied please get in touch with us.