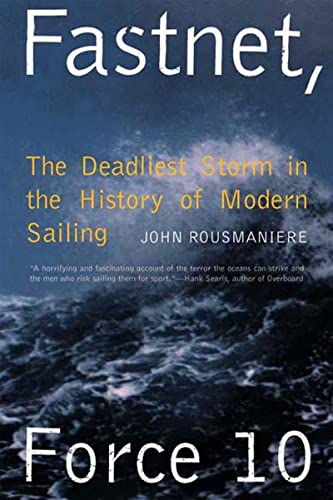 In Stock
$14.39
In August 1979, 303 yachts began the 600-mile Fastnet Race from the Isle of Wight off the southwest coast of England to Fastnet Rock off the Irish coast and back.
Good
Only 1 left

Fastnet, Force 10: The Deadliest Storm in the History of Modern Sailing by John Rousmaniere

It began in fine weather, then suddenly became a terrifying ordeal. A Force 10, sixty-knot storm swept across the North Atlantic with a speed that confounded forecasters, slamming into the fleet with epic fury. For twenty hours, 2,500 men and women were smashed by forty-foot breaking waves, while rescue helicopters and lifeboats struggled to save them. By the time the race was over, fifteen people had died, twenty-four crews had abandoned ship, five yachts had sunk, 136 sailors had been rescued, and only 85 boats had finished the race. John Rousmaniere was there, and he tells the tragic story of the greatest disaster in the history of yachting as only one who has sailed through the teeth of a killer storm can. With a new introduction by the author.

"John Rousmaniere's gripping account of that calamitous race is a must-read for anyone thinking about sailing offshore. This richly detailed account provides inspiration for all sailors to thoroughly prepare and use good sense at sea." -- Gary Jobson, ESPN sailing commentator
"There are few new lessons in safety at sea. What we teach is the accumulated wisdom of centuries, passed down to us by those who took the trouble to think and then to write. [Fastnet, Force 10] is still the best single source of those lessons, in my view.... Thanks for a great book and a lifetime of caring for those who go down to the sea in ships." -- John Bonds, Safety-at-sea expert and former director of the U.S. Sailing Association and the U.S. Naval Academy sailing program
"I reread Fastnet, Force 10 for at least the fourth time, with pleasure and admiration, as always. For a long time now, it has been a huge favorite of mine; as a writer, I'm dazzled by [John Rousmaniere]'s sure-footed handling of a complex narrative, with multiple points of view, all beautifully woven into a continuous and powerful story. After twenty years, it still reads as freshly as ever." -- Jonathan Raban, author of Passage to Juneau, Coasting, and Old Glory and editor of The Oxford Book of the Sea

John Rousmaniere has sailed in over 35,000 miles of offshore voyaging and racing. He crewed on the 48-foot Toscana in the fateful Fastnet Race of 1979.

GOR001374987
Fastnet, Force 10: The Deadliest Storm in the History of Modern Sailing by John Rousmaniere
John Rousmaniere
Used - Good
Paperback
WW Norton & Co
1993-09-08
304
0393308650
9780393308655
N/A
Book picture is for illustrative purposes only, actual binding, cover or edition may vary.
This is a used book - there is no escaping the fact it has been read by someone else and it will show signs of wear and previous use. Overall we expect it to be in very good condition, but if you are not entirely satisfied please get in touch with us.