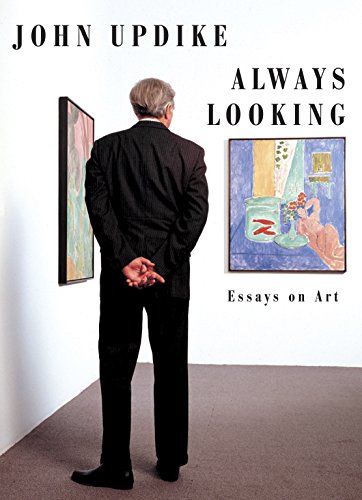 Used Price
$139.99
Free Shipping in the US
A collection of art criticism and a masterclass in appreciating art - from the great American man of letters. It treats readers to a series of essays on art, and includes writing on a comprehensive array of subjects, both American and European.
Reviews:
Trustpilot
Very Good

Following on from the acclaimed Just Looking and Still Looking, Always Looking is an insightful collection of art criticism and a masterclass in appreciating art - from the great American man of letters, John Updike.

Always Looking treats readers to a series of elegant and sensitive essays on art, and includes writing on a comprehensive array of subjects, both American and European. In 'The Clarity of Things', Updike looks closely at Copley, Homer, Abstract Expressionism, and Pop, in order to explore what is 'American' in American art. From here he moves to masterpieces of American and European art of the nineteenth and twentieth centuries -- from the sublime landscapes of Frederic Church and the series paintings of Monet and Degas, to the verbal-visual puzzles of Magritte and the steely sculptural environments of Richard Serra.

With more than two-hundred full-colour reproductions, Always Looking is an invitation to see the world afresh through the eyes of John Updike, a matchless connoisseur.

'Our time's greatest man of letters - as brilliant a literary critic and essayist as he was a novelist and short-story writer. His death constitutes a loss to our literature that is immeasurable'Philip Roth

'He was a modern master, a colossal figure in American letters, the finest writer working in English. He dazzled us with his interests and intellectual curiosity, and he turned a beautiful sentence' Ian McEwan

'Updike was that rare creature: an all-around man of letters, a literary decathlete who brought to his criticism an insider's understanding of craft and technique; a first-class appreciator of talent, capable of describing other artists' work with nimble, pictorial brilliance; an ebullient observer, who could bring to essays about dinosaurs or golf or even the theory of relativity a contagious, boyish sense of wonder' Michiko Kakutani, New York Times

John Updike was born in 1932 in Shillington, Pennsylvania. He graduated from Harvard College in 1954, and spent a year in Oxford, at the Ruskin School of Drawing and Fine Art. His novels, stories, and nonfiction collections have won numerous awards, including the Pulitzer Prize, the National Book Award, the National Book Critics Circle Award, the PEN/Faulkner Award and the Howells Medal of the American Academy of Arts and Letters. He died in January 2009.

Christopher Carduff, the editor of this volume, is a member of the staff of The Library of America. He is also the editor of Higher Gossip, a collection of John Updike's essays and criticism.

John Updike was born in 1932 in Shillington, Pennsylvania. He is the author of over fifty books, including The Poorhouse Fair; the Rabbit series (Rabbit, Run; Rabbit Redux; Rabbit Is Rich; Rabbit At Rest); Marry Me; The Witches of Eastwick, which was made into a major feature film; Memories of the Ford Administration; Brazil; In the Beauty of the Lilies; Toward the End of Time; Gertrude and Claudius; and Seek My Face. He has written a number of collections of short stories, including The Afterlife and Other Stories and Licks of Love, which includes a final Rabbit story, Rabbit Remembered. His essays and criticism first appeared in publications such as the New Yorker and the New York Review of Books, and are now collected into numerous volumes. Collected Poems 1953-1993 brings together almost all of his verse, and a new edition of his Selected Poems is forthcoming from Hamish Hamilton. His novels, stories, and non-fiction collections have won have won the Pulitzer Prize, the National Book Award, the PEN/Faulkner Award, the American Book Award, the National Book Critics Circle Award, the Rosenthal Award and the Howells Medal. Updike graduated from Harvard College in 1954, and spent a year at Oxford's Ruskin School of Drawing and Fine Art. From 1955 to 1957 he was a member of staff at the New Yorker, and he lived in Massachusetts from 1957 until his death in January 2009.

GOR005207974
Always Looking: Essays on Art by John Updike
John Updike
Used - Very Good
Hardback
Penguin Books Ltd
2012-12-03
224
0241145848
9780241145845
N/A
Book picture is for illustrative purposes only, actual binding, cover or edition may vary.
This is a used book - there is no escaping the fact it has been read by someone else and it will show signs of wear and previous use. Overall we expect it to be in very good condition, but if you are not entirely satisfied please get in touch with us.