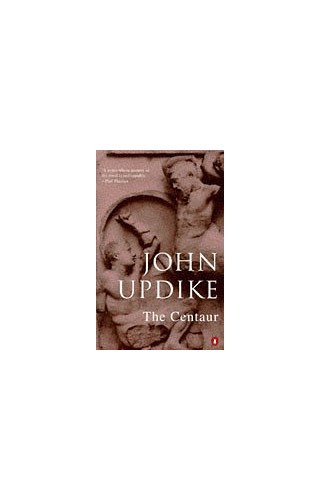 The Centaur
by John Updike

In Stock
$17.49
In a small Pennsylvania town in the late 1940s, schoolteacher George Caldwell yearns to find some meaning in his life. Alone with his teenage son for three days in a blizzard, Caldwell sees his son grow and change as he himself begins to lose touch with his life.
Very Good Good
Only 3 left

The Centaur by John Updike

In a small Pennsylvania town in the late 1940s, schoolteacher George Caldwell yearns to find some meaning in his life. Alone with his teenage son for three days in a blizzard, Caldwell sees his son grow and change as he himself begins to lost touch with his life. Interwoven with the myth of Chiron, the noblest centaur, and his own relationship to Prometheus, The Centaur is one of John Updike's most brilliant and unusual novels.

GOR001240441
The Centaur by John Updike
John Updike
Penguin Modern Classics
Used - Very Good
Paperback
Penguin Books Ltd
1970-08-27
272
0140023402
9780140023404
N/A
Book picture is for illustrative purposes only, actual binding, cover or edition may vary.
This is a used book - there is no escaping the fact it has been read by someone else and it will show signs of wear and previous use. Overall we expect it to be in very good condition, but if you are not entirely satisfied please get in touch with us.