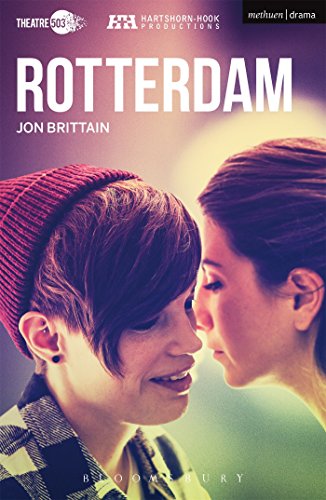 No, Alice, I don't want to become a man, I just want to stop trying to be a woman. It's New Year in Rotterdam, and Alice has finally plucked up the courage to email her parents and tell them she's gay. But before she can hit send, her girlfriend reveals that he has always identified as a man and now wants to start living as one. Now Alice must face a question she never thought she'd ask . . . does this mean she's straight? A bittersweet comedy about gender, sexuality and being a long way from home. A programme text edition which was published to coincide with the world premiere at Theatre503, London, on 27 October 2015

Jon Brittain's warm-hearted new play manages to speak eloquently about a complex issue while at the same time being properly laugh-out-loud funny. It's an arresting combination and likely to prove another winner . . . this is a very human play, one that never feels overtly issue-driven or forced. . . . Sweet, heartfelt and funny new play about gender, identity and love * Stage *
a timely and heartwarming comedy. . . . The play is a fascinating - and very funny - examination of the labels society puts on people . . . But more importantly, it's about the labels we put on ourselves. . . . Brittain's script successfully combines laugh-out-loud humour and heartfelt emotion to tackle a serious, complex and extremely current subject. . . . funny, warm and honest * London Theatre 1 *
smartly observed and very funny play . . . The reference to Europe's largest cargo port is a drama keenly concerned with transitions and upheaval - the displacement of individuals' baggage, and of society's. . . . a warm and emotionally intelligent piece, which proves questions about sexuality and the ways in which we articulate identity and desire. * Evening Standard *
Rotterdam takes the format of a rom-com to raise thorny issues of gender, sexuality and identity with a light touch that is sensitive rather than superficial . . . Brittain's play is a shart and sassy contemporary take on the fluidity of sexuality with loads of laugh-out-loud moments that don't belittle its essentially serious themes. Beautifully constructed with surprising but credible plot twists, Rotterdam is a warmly engaging account of the complexities of relationships that balances humour with pathos so that you care for the characters. * Londonist *
very funny, engaging and sharply observant about human nature * Guardian *
It humanises and empathises - and forces its audience to do the same. [...] While the play sensitively probes the difficulties of being gay and of being transgender, Brittain never lets the seriousness drown out the humour. . . . Brittain's play is another reminder - warm, witty and wise - of the stupidity of thinking that there are only two genders. He has an eye for tenderness . . . and an ear for the undulations of couples' conversations. * Time Out London *

Jon Brittain is a playwright, comedy writer and director. His plays include The Wake, Phillipa and Will are Now in a Relationship, The Sexual Awakening of Peter Mayo and My Imaginary Friend Patrick Stewart. He co-created Margaret Thatcher Queen of Soho, was one of the Theatre503 Five, has written on shows for Cartoon Network and directed both of John Kearns' Fosters Award winning comedy shows.

GOR007182729
Rotterdam by Jon Brittain
Jon Brittain
Modern Plays
Used - Very Good
Paperback
Bloomsbury Publishing PLC
2015-10-27
120
1474284183
9781474284189
N/A
Book picture is for illustrative purposes only, actual binding, cover or edition may vary.
This is a used book - there is no escaping the fact it has been read by someone else and it will show signs of wear and previous use. Overall we expect it to be in very good condition, but if you are not entirely satisfied please get in touch with us.