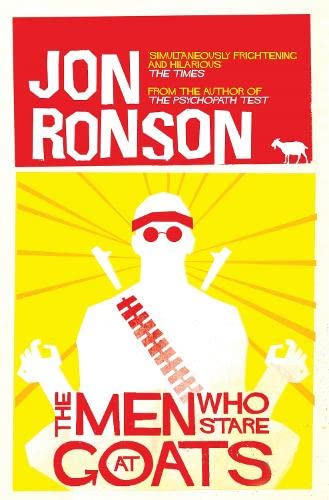 The Men Who Stare At Goats
by Jon Ronson

In Stock
$10.39
The Sunday Times number one bestseller that inspired the major motion picture.
Like New Very Good Good
10 in stock

The Men Who Stare At Goats Summary

Often funny, sometimes chilling and always thought-provoking, journalist Jon Ronson's Sunday Times bestseller The Men Who Stare at Goats is a story so unbelievable it has to be true.

In 1979 a secret unit was established by the most gifted minds within the US Army. Defying all known military practice - and indeed the laws of physics - they believed that a soldier could adopt a cloak of invisibility, pass cleanly through walls, and, perhaps most chillingly, kill goats just by staring at them.

They were the First Earth Battalion. And they really weren't joking. What's more, they're back and fighting George Bush's War on Terror.

The Men Who Stare At Goats Reviews

Not only a narcotic road trip through the wackier reaches of Bush's war effort, but also an unmissable account of the insanity that has lately been done in our names. * Observer *
Funny and gravely serious, what emerges is a world shrouded in secrecy, mystery and wackiness, where Warrior Monks and psychic spies battle it out for military thinking. Mind-blowing stuff. * Metro *

GOR001222216
The Men Who Stare At Goats by Jon Ronson
Jon Ronson
Used - Very Good
Paperback
Pan Macmillan
2005-08-01
288
0330375482
9780330375481
N/A
Book picture is for illustrative purposes only, actual binding, cover or edition may vary.
This is a used book - there is no escaping the fact it has been read by someone else and it will show signs of wear and previous use. Overall we expect it to be in very good condition, but if you are not entirely satisfied please get in touch with us.