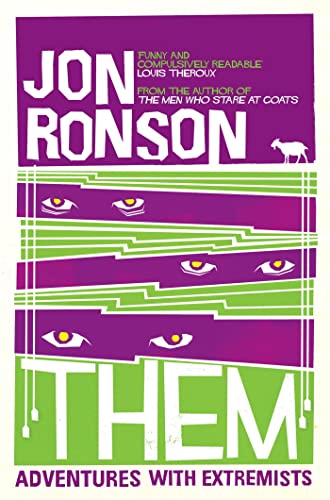 Them: Adventures with Extremists
by Jon Ronson

In Stock
$8.39
The brilliant first book from the number one bestselling author of The Psychopath Test.
Like New Very Good
Only 1 left

Them: Adventures with Extremists Summary

Them: Adventures with Extremists by Jon Ronson

Guardian journalist Jon Ronson's Them began as a book about different kinds of extremists, but after Jon had got to know some of them - Islamic fundamentalists, neo-Nazis, Ku Klux Klansmen - he found that they had one oddly similar belief: that a tiny, shadowy elite rule the world from a secret room . . .

In Them, Jon sets out, with the help of the extremists, to locate that room. The journey is as creepy as it is comic, and along the way Jon is chased by men in dark glasses, unmasked as a Jew in the middle of a Jihad training camp, and witnesses international CEOs and politicians participate in a bizarre pagan ritual in the forests of northern California.

Them is a fascinating and entertaining exploration of extremism, in which Jon learns some alarming things about the looking-glass world of 'them' and 'us'. Are the extremists on to something? Or has Jon become one of them?

Them: Adventures with Extremists Reviews

This book is chilling and hilarious by turns. Ronson's trademark laid-back attitude is a delight. * Independent *
A funny and compulsively readable picaresque adventure through a paranoid shadow world. -- Louis Theroux * Guardian *

GOR009153897
Them: Adventures with Extremists by Jon Ronson
Jon Ronson
Used - Like New
Paperback
Pan Macmillan
2002-04-01
352
0330375466
9780330375467
N/A
Book picture is for illustrative purposes only, actual binding, cover or edition may vary.
The book has been read, but looks new. The book cover has no visible wear, and the dust jacket is included if applicable. No missing or damaged pages, no tears, possible very minimal creasing, no underlining or highlighting of text, and no writing in the margins.